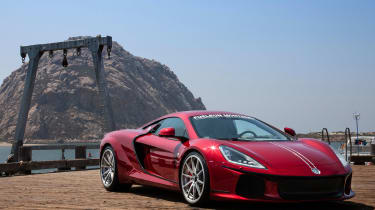 A special launch version of ATS Automobili’s new supercar, the GT, has been announced. This is the first production version of the carbonfibre Italian supercar and features the final production interior with CNS milled aluminum buttons and a gear selector with an open linkage. The GT Launch Edition will be limited to 12 cars and will cost €740,000, or over £780,000 when you include taxes.

The ATS Automobili GT has bespoke carbonfibre bodywork that emulates its 1963 predecessor (also named GT) that covers a chassis and drivetrain borrowed from McLaren, including the British firm’s 3.8-litre twin-turbocharged V8. The GT’s standard output is 720bhp, but it can be equipped with a Corsa package that takes power to 819bhp – very impressive especially when you consider the car’s dry weight of just 1300kg. The additional power the GT makes over its McLaren sibling – the 3.8-litre V8 in the 675LT puts out 666bhp – is partly thanks to a hand-built active titanium exhaust.

> Click here for our review of the McLaren 675LT

The noise and volume of the exhaust, changes depending on which setting the car is in. Three driver modes can be selected via two aluminium knobs in the centre of the car that allow the driver to select between Viaggo, Sport and Corsa – the engine and chassis also alter depending on the mode selected. Two other switches allow the attitude of the transmission and rear wing to be altered as well. 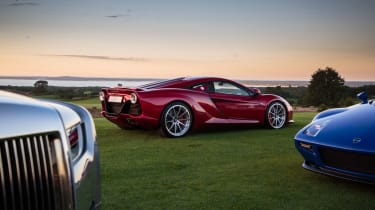 ATS has also announced that the GT will come on Michelin rubber, buyers will have a choice of the extreme Pilot Sport Cup 2s or the less aggressive Pilot Sport 4S tyres. As well as having over 700bhp to contend with, the tyres will have to deal with the braking force of a set of Brembo carbon-ceramic brakes.

Whether the GT has the Corsa package or not, there’s no doubting it’ll be brisk. Official performance figures for the car are yet to be released, but ATS says the GT should be able to hit 62mph in around 3 seconds and will be capable of a top speed of over 200mph.

> Click here for our review of the McLaren 650S

The GT is styled by Emanuele Bomboi, formerly of Fiat and later design director of Bertone, and ATS says it offers a 'timeless yet striking design, evoking the brand's past while reflecting its very contemporary performance'. Although it is hard to see the resemblance to the 1963 car, the new GT takes on many contemporary supercar design cues, including a low front scuttle and highlighted accent line running along the side of the glasshouse. 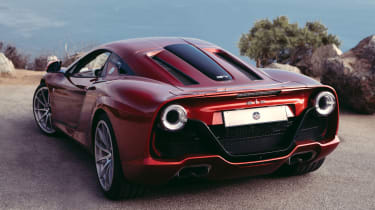 ATS Automobili itself has quite the interesting heritage. A by-product of turbulent times at Ferrari in the early 1960s, the brand was born when internal personal battles drove a sub-set of designers and engineers (including Carlo Chiti and Giotto Bizzarrini) out from prancing horse's stable. They eventually reformed themselves into ATS Automobili. Launched in 1963, the GT and motorsport biased GTS were the brand's first cars. Both were technologically advanced for their time, but a commercial flop with only 12 produced in total between 1963 and 1965.

The engineering prowess brought to ATS by these former Ferrari innovators was evident in the original GT though. The car is able to claim the title of the first mid-engined Italian supercar – an honour usually thought to be associated with the Lamborghini Miura that appeared three years later.