The MY20 Nissan GT-R starts from £83,995 and features a handful of incremental updates 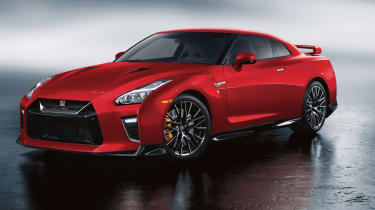 The R35 GT-R might be into its 12th year, but following the reveal of its track-derived 2020 GT-R Nismo in April, Nissan has turned its attention to the standard car, tweaking styling and improving performance.

The model’s twin-turbocharged 3.8-litre VR38DETT V6 produces the same 562bhp and 466lb ft of torque as before, but receives new turbochargers for better low end response and a five percent increase in efficiency thanks to improved seals. No new performance figures have been quoted, and so it’s likely that the same 196mph top speed at 2.7sec 0-62mph time remain.

Elsewhere, the gearbox has received a tune-up resulting in a 0.15sec reduction in R-mode shift times, while the suspension has been altered to provide a more comfortable ride, also providing greater high speed stability. Steering has also seen improvements, making it more linear and precise, with brake boosters tweaked to provide a more immediate response. 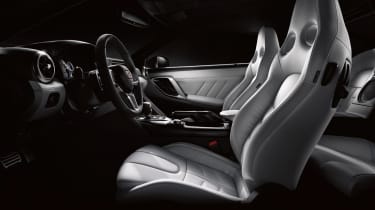 Move to the outside and you might notice the use of Bayside blue, a four layer shade last seen on the R34 GT-R. A new titanium exhaust muffler with burnished blue tips is also available, alongside 20” wheels and a grey leather interior option, replacing ivory and sitting alongside black, tan and red.