Italian supercar maker’s track-only creation will set you back £100,000 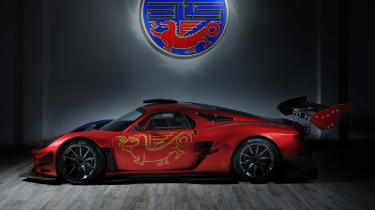 Following the road-going GT of last year, ATS Automobili has unveiled an all-new, track-only supercar. Developed by the marque’s new ‘Corsa’ division, the RR Turbo will cost from €110,000 (approx. £100,000), and deliveries are expected to commence in spring of next year.

Unlike the McLaren MP4-12C-based GT, the new model has been developed entirely in-house in order to keep costs down, and more accurately follow the brief. Though it may seem a bargain when compared to the likes of BAC’s Mono R, quality certainly hasn’t been compromised where it matters, as you’ll find plenty of high-end componentry and construction methods throughout.

Powering the RR Turbo is a Honda-derived 2-litre four-cylinder, reinforced with forged pistons, bespoke intake and exhaust manifolds and a larger Garrett turbocharger. Thanks to the use of a Hondata ECU, it produces 591bhp at 8500rpm and 390lb ft of torque. Yes, from a 2-litre four-pot. It also boasts a flat power curve from 4000 to 7000rpm – a very desirable trait for a machine destined for the track. 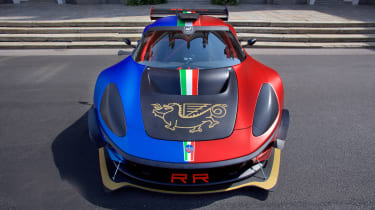 Taking notes from open-wheeled racers, the RR Turbo’s engine and gearbox are tied together through a monoblock bellhousing, supporting other components such as the suspension, wing mount and exhaust. This, alongside the use of a lightweight space-frame chassis (that weighs just 40kg without the roll bar), helps the model to achieve its staggeringly low 780kg weight figure. An FIA-homologated roll-cage is also included, opening doors to events such as GT Cup championships, all European hill climbs and much more.

If you hadn’t noticed, the combination of a 780kg weight figure and a 591bhp peak power output gives the RR Turbo a power-to-weight ratio of 770bhp per tonne. That’s 158bhp per ton more than the 612 of the BAC’s new Mono R, and more than even the seven-figure McLaren P1 GTR. Performance figures are yet to be revealed, but it’s safe to assume they’ll be rather impressive…

First deliveries are set to begin in spring 2020.