The BAC Mono R takes the brand's road-legal, single-seater formula to the next level with more power and less weight 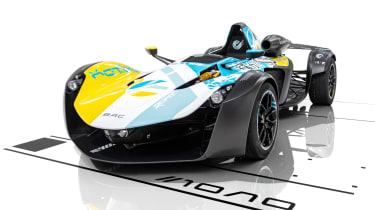 A swansong for BAC’s naturally-aspirated offerings, the very first customer Mono R has hit the road following its debut at the 2019 Goodwood Festival of Speed. Just 30 units will be produced in total with pricing starting at £190,950.

As if a single-seat road car wasn’t wild enough, this first example has been finished in a livery referencing the PlayStation racing game ‘WipEout’; coincidentally, a series that originated in BAC’s home town of Liverpool. Designed in collaboration with its co-creator Nick Burcombe and graphic designer Eddie Wainwright, the painting process took over 10 days to complete. The European customer has also received a matching helmet to complete the package.

Described as a ‘Gen2’ car, the Mono R comes with a fettled engine for more power, a reduction in weight and tweaks throughout for a more refined, and undoubtedly more exhilarating, driving experience on both the road and track.

Under the carbonfibre skin sits a naturally aspirated 2.5-litre four-cylinder engine, co-developed with Mountune to produce 340bhp, up 35bhp on the previous car. An increased cylinder bore size and reduced crankshaft stroke sit amongst other tweaks to help it earn it the title of ‘world’s most power dense naturally aspirated, road-legal engine’ (136bhp per litre). Another impressive stat is the increase in its red line, taking it from 7800rpm to a near LFA-matching 8800. An all-new drive-by-wire throttle body and cylinder head system also help to make it more responsive.

Not only does the Mono R produce more power, it has less weight too. Some 25kg have been dropped from the total figure, thanks to the use of new graphene-enhanced carbon body panels, new carbon-ceramic brakes, a titanium exhaust system, lighter AP Racing brake calipers and a carbon floor. Do the maths and you’ll find that its 555kg kerb weight and 340bhp output makes for a 612bhp-per-ton power-to-weight ratio, exceeding that of the McLaren P1 and almost matching the Ferrari LaFerrari. As you can probably imagine, such a power-to-weight number means impressive performance: 0-60mph comes in just 2.5sec, a healthy 0.3sec improvement on the previous car, and top speed remains at 170mph. 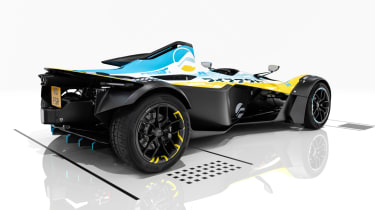 Design remains recognisably BAC, but the brand does claim that 44 carbon parts have seen updates for added aggression and better aerodynamic efficiency. A sharknose front end adds aggression, with the main beam LED lights mounted centrally to allow for a reduction in frontal area. A Formula 1-style ram-air inlet system can also be found behind the driver’s head, and the front arches, side pods and rear wing have also received tweaks for better performance. 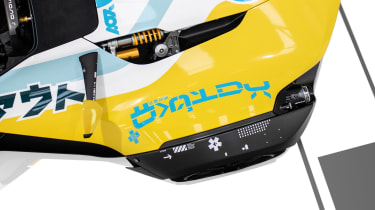 Inside, owners have the same ability to customise the interior to their liking as before – a new, lighter carbon steering wheel is also included, and carbon interior side panels are available as an option.

If you’d like to get your hands on one, you’re out of luck. All 30 units have already been sold to existing Mono owners. Pricing begins at £190,950.