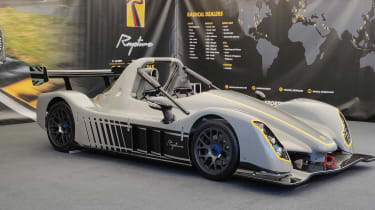 Following the reveal of the new BAC Mono R, Goodwood Festival of Speed has provided us with yet another race-inspired road-legal car, the Radical Rapture.

Unlike BAC, Radical's primary interest is in the development of track-only racers, something it’s using to its advantage with the Rapture. Focus is on aerodynamic efficiency and a lack of weight as opposed to tarmac-tearing power, a theme found in all of its models.

This aside, power isn’t something you’ll be missing, as a 2.3-litre Ford EcoBoost four-cylinder puts 350bhp and 320lb ft to the ground through a six-speed paddleshift gearbox. Radical has added all-new turbo architecture and a new air induction system itself for a little more go. 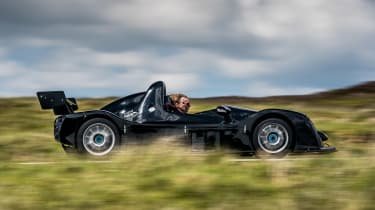 The main attraction, though, is the Rapture’s aerodynamics and race-inspired set-up, making even some track-only models look a little vanilla. A lightweight space-frame chassis with an FIA-compliant safety cell lies under the skin, alongside a tweaked version of the firm’s Nik-link suspension, complete with adjustable dampers. A bi-plane rear wing and double-tunnel rear diffuser are also included for downforce.

Further reminding you of its racing origins, you’ll find two moulded racing seats with multi-point harnesses inside, alongside an LCD display with data-logging abilities.

Though the model is only road legal in the UK and the rest of Europe, plans are to homologate it for use on the road worldwide, and should you want to take full advantage of the performance the Rapture has to offer, the brand is offering a tailored track tuition package for all owners.

Order books open soon. However, pricing details are yet to be announced. First deliveries are set to begin later this year.