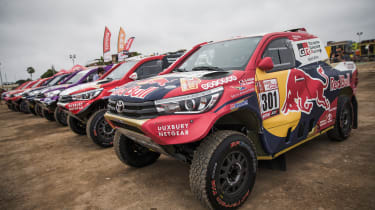 It’s just a few weeks until the flag drops for the world’s most gruelling rally with the entire route running within the borders of Peru for 2019. A total of 334 vehicles are due to participate, all of which share the same goal to return to the capital after over 3100 miles of pure, hardcore driving (with an additional 1860 miles of special stages).

Navigating such open terrain without deviation and having the raw physical strength to cope with demanding sections are the key attributes all entrants must have to succeed. Due to the magnitude of the event and immense preparation required, premature retirement is hugely disappointing. This year though, racers that fall out in the opening half of the rally will be able to re-join in a separate classification, following a rest day in a parallel competition. Although they won’t be able to start in the first 25 places for a special stage, it’ll give racers a welcome opportunity to drive again. 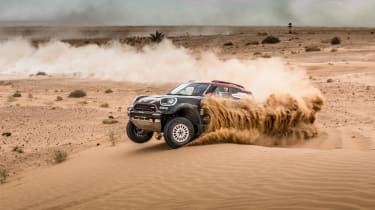 The car class consists of several sub-categories, however all are restricted to a weight of less than 3500kg. Categories for each car are determined based on fuel type, driven wheels and overall vehicle type. The field is usually dominated by fully spec’d all-wheel-drive cars. Interestingly, petrol powered cars are allowed a slightly larger restrictor device than diesel cars, because it was decided that oil-burners had too much of an advantage in recent years.

This year, Ssangyong has announced it will be using an all-new model for the race, the V8-powered, 450bhp Rexton DKR which falls into the T1-3 class, for rear-wheel-drive petrol-powered cars. Toyota Gazoo Racing announced that for 2019, its Hilux will make a return to the rally, a car that has previously accumulated five podium finishes. It offers a refined suspension set-up for sharper handling, more power from the engine and various other tweaks. The Spanish arm of Mitsubishi is also entering the race with a T1 class Mitsubishi Eclipse, built around a steel spaceframe chassis with a carbonfibre body. It sports a turbo-diesel engine producing around 340bhp and 505ft lb of torque.

It’s not just cars that can enter the rally, with trucks, bikes and quads making an appearance too. Two categories of truck are permitted, with each category featuring varying levels of modification. Bikes are limited to under 450cc and also come in two different forms; ‘Marathon’ spec, as the manufacturer designed and ‘super production’, essentially for modified bikes. As for quad bikes, you can run whatever you’d like, two- or four-wheel drive, providing it’s under 500cc. 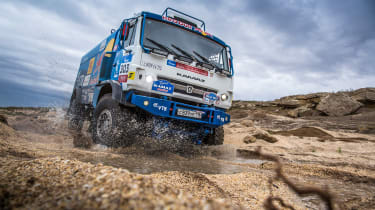 In recent years, Mini has claimed the most victories however Mitsubishi is historically the most successful manufacturer in the class overall, with Volkswagen, Citroen, Peugeot and Porsche all having had success in the past too.

How long is the Dakar Rally?

Is it safe for spectators?

Organisers say that safety of everyone involved with the event is the primary concern and that everything is done to ensure risks are kept to an absolute minimum, revising and optimising safety procedures every year. Spectators view the event from 30 different ‘secure zones’ along the course, with 9000 members of security staff in attendance. 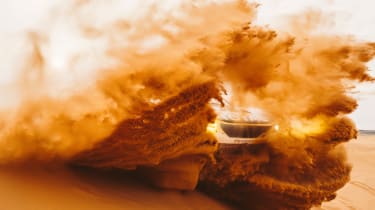 How dangerous is the Dakar Rally?

Unfortunately, motorsport comes with an element of danger no matter what and so over the 41 years the rally has been running, 70 people, including 28 competitors, have lost their lives. Through the advancements of safety and communication technology however, the Dakar Rally is significantly safer than it once was. Limiting speed, making resting at fuel stops mandatory and reducing fuel capacity requirements for the bike classes are all examples of how the organisers have changed the event for the better over the years.

Left in awe by his experience in the Libyan desert during the 1977 Abidjan to Nice rally, Thierry Sabine wanted to return there with a rally of his own. He persuaded 182 competitors to sign up for the inaugural Paris Dakar Rally in 1979 and join him on a 6,000-mile journey, passing through five countries over two continents. As you have probably guessed, the race starting in Paris, France and finished in Dakar, Senegal. 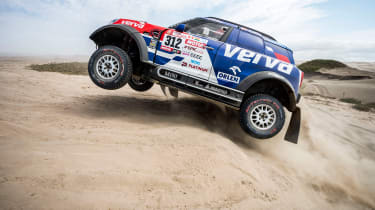 While the eponymous start and finish points were fixed for Paris Dakar rallies up until 1992, the route often changed. From 1993, the start and finish locations began to vary as well, with South Africa, Spain and Portugal all featuring. Africa always constituted the bulk of the route up until 2008. In that year, a terrorist attack in Mauritania forced organisers to cancel the event as the route was planned to pass through that country. Since then, the ‘Dakar Rally’ has been held in South America.

Mitsubishi has become the most successful car manufacturer in Dakar history with twelve wins, double that of Peugeot which has the second most. Stephane Peterhansel is the most decorated Dakar driver and rider in history with thirteen victories. His first win came with Yamaha in 1991, before he went on to claim more titles with Nissan, Mitsubishi, BMW, Mini and Peugeot.