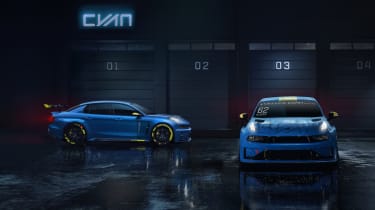 Chinese car manufacturer Lynk & Co has announced it will race in next year’s World Touring Car Championship, the international TCR cup. This new touring car programme will also inspire a 500bhp concept road car that will hint at the possibility of a future high-performance production car from Lynk & Co.

The TCR car, developed by Geely Group Motorsport, will be based on Lynk & Co’s upcoming 03 saloon and will make its track debut next year at the first round of the WTCR championship. Known as the 03 TCR, the new car is powered by a 2-litre turbocharged four-cylinder engine and a six-speed sequential gearbox. With a quoted power figure of 345bhp and a weight of 1265kg, it’s on par with the rest of the TCR field. Also, just as the rules stipulate, Lynk & Co’s TCR car will be front-wheel drive.

The 03 TCR car will be competing against seven other manufactures who have been creating TCR cars for a number of years, including Alfa Romeo, Audi, Volkswagen, Honda, Hyundai, Peugeot and Cupra (previously SEAT). However, the TCR rules rely on a strict balance of performance regime where different weight, ride height and engine restrictions are enforced on each car so they all perform in a similar manner. 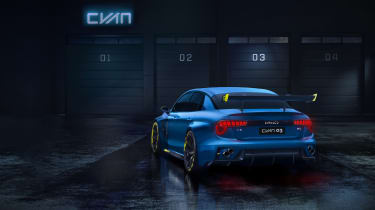 What’s more, even though this is Lynk & Co and Geely Group Motorsport’s first foray into racing, there will be plenty of experience from the team as it will be run by Cyan Racing, formerly known as Polestar Racing, which has campaigned Volvos – a marque now also part of the Geely Group – for many years. From 2014 to 2016 Cyan Racing competed in Australia’s V8 Supercar championship, but after not winning the championship it turned its attention to WTCC where it won the 2017 manufactures’ title.

> Find out more about Polestar

Cyan Racing’s ace driver, Thed Björk, also took the drivers’ title in the same year. He has remained loyal to the Swedish team and will race Lynk & Co’s new race car in the 2019 WTCR series. 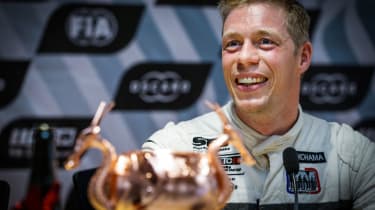 Very little is known about the future high-performance road car concept other than it will take inspiration from the TCR car and will have 500bhp-or-thereabouts. There are rumours that it could get its power from a V8 engine – lifted from one of Cyan Racing’s old V8 Supercar Volvo S60s, maybe? However, if a performance version of the 03 does make production we’d expect it’s more likely to be mechanically similar to the TCR race car than the concept, with a 2-litre turbocharged four-cylinder engine ­– like many of the road going versions of current TCR cars.