From 914bhp pickups to new crate engines, the best things to see at this year’s SEMA 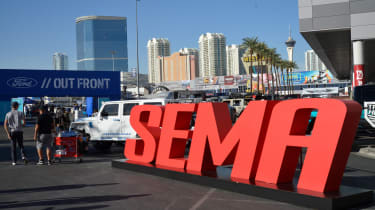 The SEMA show in Las Vegas is the biggest tuner and aftermarket event in the world. If you want to surround yourself with jacked-up pickups with matt wraps or super-low supercars with bolted-on arches and deep-dish split-rim wheels, it is the place to go. But for every cosmetically upgraded car at the show, there’s a car with some meaningful performance modifications lurking just around the corner.

The most respectable aftermarket companies from around the globe flock to Vegas to exhibit cars that demonstrate just what they’re capable of as well as show off their shiny new parts. Sometimes these creations, although designed to be used and raced, can be as wild-looking as the static-only show cars, but with semi-sensible ride heights and a tyre and wheelarch clearance that’s greater than the thickness of a cheap business card you would actually want to drive them rather than just look at them.

SEMA has also become a place where car manufacturers exhibit their own aftermarket-style options or approved third-party upgrades. It takes a lot to be noticed at the event, and the manufacturer-sanctioned half cages, coilover suspension and stainless steel exhausts that get announced can easily be overlooked. However, although more subtle, it’s great to see OEMs creating more focussed and more aggressive versions of their cars.

Here are the highlights from 2018’s SEMA show. 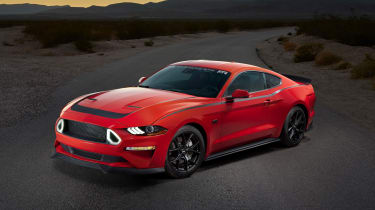 It just wouldn’t be SEMA without hoards of modified Mustangs. This year Ford’s official show car has been created in collaboration with RTR Vehicles, an American firm that creates styling modifications for Fords. This Mustang, known as the Series 1, will feature new 19-inch wheels, an aero pack consisting of a Gurney flap-style spoiler, front splitter and side skirts and RTR’s grille with built-in LED lights. The Series 1 will be limited to just 500 units.

Abt Audi RS5-R and SQ5 Widebody 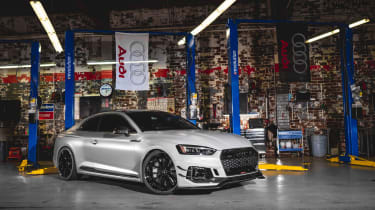 It isn’t just American firms that use SEMA to show off their latest products, German tuner Abt has two cars on display; its 503bhp Audi RS5-R sporting 21-inch wheels, dive planes and a carbonfibre-tipped exhaust, and the SQ5 Widebody with even larger wheels (22-inch), an aero kit and, as if the name hadn’t given it away, wide arches. 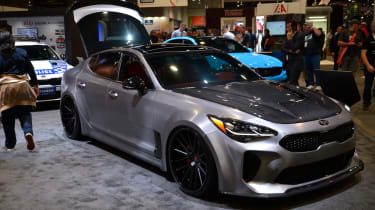 At this year’s SEMA show Kia has unveiled an aggressively styled versions of its big saloon, the K900, and its GT-cum-sedan, the Stinger. The K900, a BMW 7-series-sized saloon that we don’t get in the UK, has a new dark grille, massive 24-inch wheels and a custom interior. Nice, but it’s the Stinger that looks more up our street thanks to a set of wide, flared arches. 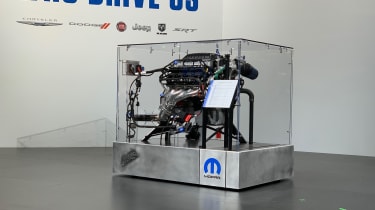 An announcement from parts department hardly sounds very exciting, but when that parts department is Mopar it’s definitely worth paying attention. This year's show announcement is the Hellephant, a 7-litre Supercharged V8 with 1000bhp. The name Hellephant is a portmanteau of Hellcat (Mopar’s previously most powerful crate engine) and Elephant (the name given to its old 7-litre Hemi V8).

To show just what you can do with such a massive powerful motor, Mopar has slotted the Hellephant into a modernised ’68 Dodge Charger that it has dubbed the Super Charger. 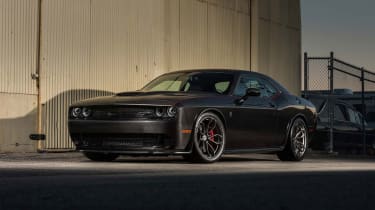 In other Mopar-related news, Speedkore, a company that creates huge-horsepower muscle cars, has taken Dodge’s utterly bonkers Challenger Demon – a car with 828bhp and capable of wheelies as standard – and made it even more ludicrous. Speedkore has replaced all the exterior bodywork with carbonfibre panels and removed the supercharger and replaced it with two turbochargers to give it 1200bhp. 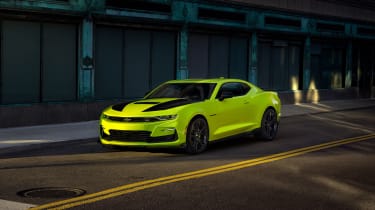 The most notable thing about the Camaro Shock is the lurid colour it’s finished in, and it explains exactly why Chevrolet decided to name it the Shock. But as well as the startling colour, the Shock has a different front end compared to the standard 2019 SS Camaro and features a body-coloured bar across its nose rather than the not-very-well-received all-black grille it was originally launched with. 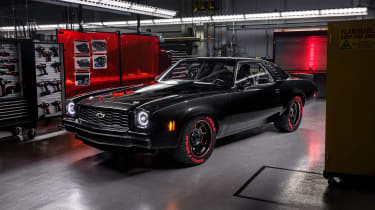 Like Mopar, Chevy will use the show to launch a range of new crate engines for people to shoehorn into ’60s muscle cars and ’70s pickups. The 6.2-litre supercharged LT5 V8 that’s usually found in the Corvette ZR1 will become available to buy, and to show just what can be done with it, Chevrolet has put one in a 1973 Chevelle. 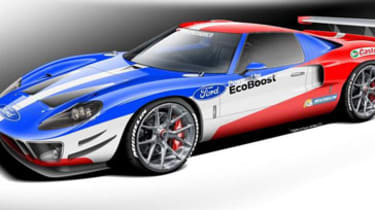 The aftermarket exhaust manufacturer Magnaflow has partnered with Superformance – a company which builds replicas of legendary road and race cars – to make a GT40 to further annoy purists. Instead of a huge Ford V8 like the original car was equipped with, the 2000s Ford GT had or even Superformance’s usual GT40 replicas use, this car is fitted with the 3.5-litre Ecoboost V6 from Ford’s current mid-engined supercar. 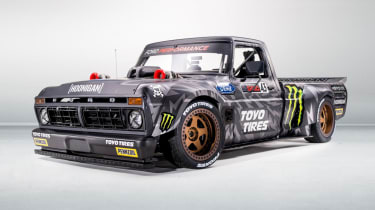 There are lots of pickups at SEMA, but very few will be of interest to those who prefer driving performance cars to towing them. However, Ken Block’s latest steer is one of the rare trucks that looks exceptionally fun to drive. The latest creation, an F-150 with the same V6 from the Ford GT Superformance has put in its car – only with 914bhp rather than the standard 647bhp – will be used in the next episode of Block’s hugely successful Gymkhana films. 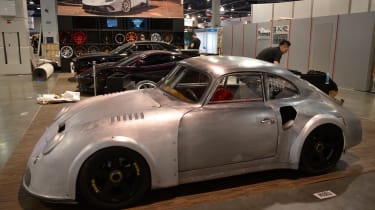 Closer to being a finished car, the 356 RSR, built by Porsche outlaw specialist Emory Motorsports, will again be on display at SEMA. The turbocharged Porsche 356 with a 400bhp 964 flat-six turbo engine also features a bare-metal body that has a 935-style open rear end with the hint of the original car’s rump hidden under the new panels. 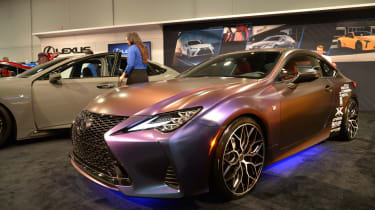 Ignoring the lowered crossover and saloon car with a wine fridge in its boot, Lexus has created some subtle but tough-looking custom cars for this year’s SEMA show. Its RC 350 F Sport Cross Country Custom sits lower than standard on some geometric Y-spoke wheels, while some Nitto performance tyres give it some real intent. The pearlescent paint and blue underbody lights are less purposeful. Lexus’s big saloon, the LS, gets a more menacing look with a battleship grey paint job, satin black wheels and additional bodywork. 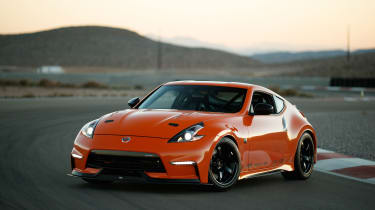 Nissan has given its aged sports car, the 370Z an freshen up with a 3-litre turbocharged V6 from the Infiniti Q60 S, a range of chassis parts and some new wheels. Despite the dramatic engine swap, Nissan – in collaboration with US-based tuning shop MA Motorsports – has devolved a clutch and flywheel assembly so the 370Z retains the fan-favourite six speed manual gearbox 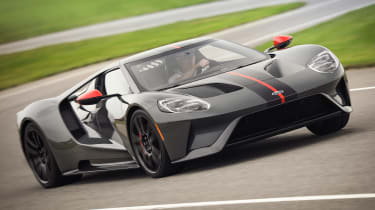 As part of its newly announced extra run of GTs, Ford has used the SEMA show to unveil a new limited-edition version, the Carbon Edition. The 18kg lighter Carbon Edition comes with all the optional carbonfibre GT parts – including the carbonfibre wheels – as well as exposed weave stripes, and new composite door sills.

> Find out more about the Ford GT Carbon Edition here