AMG is applying the final touches to the svelte new CLA45 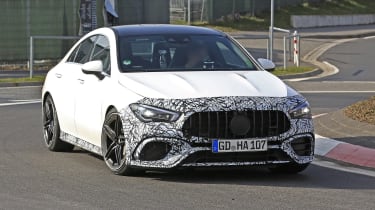 Mercedes-AMG has been spotted conducting calibration testing on its forthcoming CLA45 at the Nurburgring. The CLA45 will top the contemporary CLA range, but for the first time will sit above a second, CLA35 model; a Batman to the 35’s Robin.

It’ll be based on the recently revealed CLA, sharing its sleeker, longer and wider body shell, and employ a 2-litre turbocharged four-cylinder engine reaching the road via a 4Matic all-wheel drive, just as its predecessor did. Specifics on power have yet to be confirmed, but the rumor mill continues to turn with figures of up to 416bhp swirling around. We can also make an educated guess as to the fitment of a Focus RS-style torque vectoring rear axle, judging by dab of opposite lock the driver is applying in one of these images.

This specific test car might still be covered in the last remnants of body-disguising wrap, but it’s clear that the model we see here is the full-fat CLA45, thanks to its vertical grille slats and four exhaust pipes. The nose is also new, aping the flagship AMG GT63S four-door almost perfectly, with the large outer intakes and shapely LED headlights. The rear is more original  though, and features a chunky rear diffuser element and a lip spoiler on the bootlid’s trailing edge. 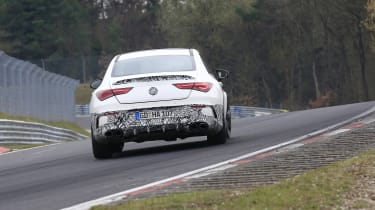 What’s clear is the new CLA45’s aesthetic refinement, appearing to have lost the slightly odd proportions that afflicted the last CLA, especially in AMG form. This model, like the standard car, instead takes advantage of its longer bonnet and smoother, less droopy tail. Wheels will likely be available in 18- or 19-inch sets, the ones on this test car being 19-inch units with a design familiar from the current C63 S.

More information will be revealed in the year, but we suspect that a fully-loaded CLA45 will start above the previous model’s £42k price-point, leaving space underneath for both the CLA35, and the A35 saloon.