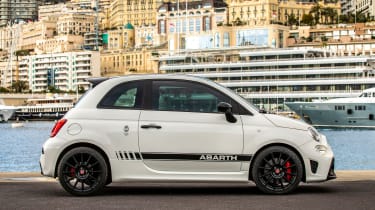 Seventy years after Carlo Abarth started the company, Abarth has announced the introduction of a new 70th Anniversary range for 2019, spanning across all the models the Turin marque currently offers.

The new cars feature 70th Anniversary badging on the exterior, alongside a selection of historically named colours as a nod to the firm’s rally wins. Turini 1975 White, Costa Brava 1972 Red, San Marino 1972 Black, Hessen 1972 Blue and Alpi Orientali 1974 Grey will all be available. Every Abarth registered in 2019 will receive the touches, from the entry-level 145bhp 595, via the 180bhp 595 Competizione, to the 124 Spider and GT.

With 10 world records, 133 international records and more than 10,000 victories to its name, racing is undoubtedly a large part of Abarth’s DNA. As a nod to this, the new range was unveiled at the opening of the 87th edition of the Monte Carlo Rally earlier this month, a rally the brand saw success at in 1980. 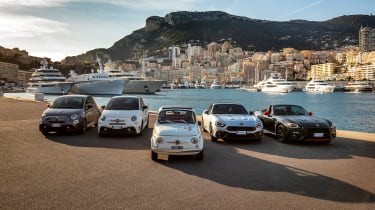 Alongside the announcement of the 70th Anniversary range came news of a new sales record, with almost 23,500 Abarth cars sold in Europe alone last year – a 36.5 per cent increase on 2017. Luca Napolitano, head of Fiat and Abarth, said: ‘Results were excellent on many markets, like the UK, where more than 5600 cars were sold, with a 26.8 per cent growth, which is a new sales record in its own right.’

To celebrate these sales results, until June 30th this year Abarth will offer a selection of Mopar accessories at a discounted price to all European customers who bought a car in 2018. 595 owners will be able to claim 20 per cent off the price of the carbonfibre kickplates, while 124 Spider and GT owners can get a strut bar at a 30 per cent discount.