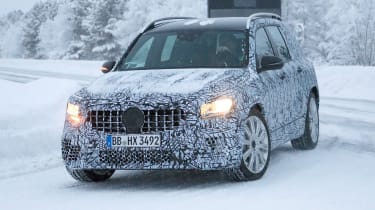 Ahead of the reveal of the standard Mercedes GLB compact SUV, spy shots have surfaced showing the GLB35 testing with larger brakes, larger exhaust tips, a modified front grille and a lower stance than the standard car seen previously. Although it could be some camouflage trickery, the car also appears to feature the brand’s ‘Panamericana’ grille, a feature usually reserved for high-end Mercedes-AMG performance cars.

The model will follow the A35 in the new range of second-tier AMG cars, sporting more aggressive bodywork, uprated brakes, a racy exhaust system and a more powerful version of the brand’s M260 engine featuring a twin-scroll turbo in place of the standard item. As in the A35 hatchback, a seven-speed AMG-tuned DCT gearbox will also feature in the GLB35.

With the A35 sprinting from 0 to 62mph in just 4.7sec, we’d imagine the larger GLB will come in with a time of just over 5.0sec. Power will come in at just over 300bhp and 300lb ft torque, and as with most performance cars from Germany, top speed will be electronically limited to 155mph. 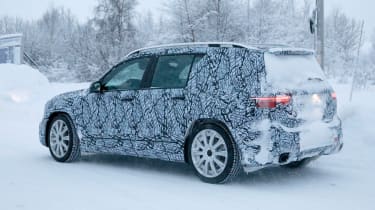 Despite previous speculation that the model would be designed as a kind of ‘baby G-class’, spy shots point towards a more refined, mainstream look. Based on the same MFA2 platform that underpins the all-new A-class, the GLB will play a similar role to the B-class, as a more spacious, practical alternative to the GLA. Rivals come in the form of the BMW X1 for the standard model and Audi SQ2 for the 35 variant. Although we’re yet to see interior images, as the car’s based on the same platform as the all-new A-class, we expect it to receive the same treatment and touchscreen technology.

The GLB will be offered with the same range of engines found in the A-class and is expected to start from just under £30,000, or £40,000 for the AMG-fettled GLB35. The model will be unveiled this summer with deliveries starting in late 2019.