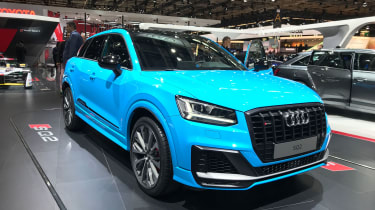 Audi’s taken the wraps off its new SQ2, a 296bhp version of the marque’s compact SUV. Despite the SUV stance, the new SQ2 might just be the ticket to get us more interested in the standard Q2 as Audi has a habit of making its performance SUVs just that little bit more entertaining than their usual hatchback cousins.

This justification comes from the previous RS Q3, a car that was to all intents and purposes more entertaining to drive than the previous-generation RS3 on which it was based. Whether this has something to do with the ‘good to drive for an SUV’ tag, or the fact it had more supple, compliant suspension than the RS3, both must be taken into consideration, but using it as reference, the SQ2 might actually prove to be an SUV worth driving. 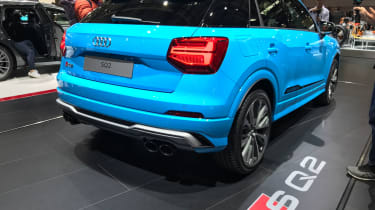 > Click here for our review of the Audi RS Q3

The basic ingredients are the usual Audi fare, sharing its 296bhp 2-litre turbocharged four-cylinder engine with many an Audi, VW, SEAT etc etc. It’ll be paired exclusively with a seven-speed dual-clutch gearbox, powering all four wheels via the usual Haldex clutch all-wheel-drive system. It’ll power through to 62mph in 4.8sec, two-tenths slower than an S-tronic-equipped S3 Sportback.

The standard Q2’s suspension has been lowered by 20mm over S-Line-equipped Q2 models, while the spring and damper set-up has also been re-tuned to deal with the extra grunt. The actual make-up of the suspension is a standard McPherson front with a multi-link suspension system at the rear.

The styling has also been given a mildly aggressive makeover, diverging from most Audi S models in having bespoke bumpers and detailing over standard S-Line examples. Changes include a more open front bumper with black detailing and a new grille design. The Q2 S-Line’s body-coloured wheelarches and sill trims are now finished in gloss black, while new 18- or optional 19-inch wheels are also visible. We expect the usual quad-exhaust pipes to be fitted, too. 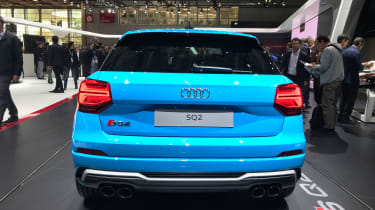 Inside there is an even more subtle combination of upgrades, including new seating trim, ‘S’ badging on the steering wheel and seats and an optional SQ2-specific virtual cockpit mirroring that in other Audi S models.

What we really want to know is whether the SQ2 will deliver the same surprisingly entertaining handling package as the RS Q3, but thankfully we won’t have to wait long as sales will begin later this year, beating the recently revealed BMW X2 M35i to the UK by nearly six months.

Not as wild and bonkers as the mid-engined Turbo, the Renault 5 GT Turbo was still a rather fine hot hatch
Visit/hyundai/i30-n-hatchback/201775/hyundai-i30-n-versus-hyundai-i30-tcr