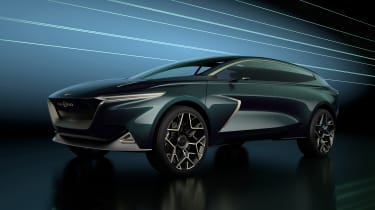 Alongside the unparalleled rise of both the SUV and electrification, it might not come as a shock to see Aston Martin’s forthcoming electric-only luxury off-shoot Lagonda showing one off at this year’s Geneva motor show. This is the Lagonda All-Terrain Concept, and could preview Lagonda’s first production model, which is slated to arrive in 2022.

Built as a purely aesthetic exercise, Aston Martin Lagonda has not revealed any specific numbers regarding its performance or battery range capability, stopping short of confirming that it utilises a flat ‘skateboard’ style battery pack that also acts as a structural part of the chassis, as it is in Teslas and the Jaguar I-Pace. As a result, the interior is largely unaffected by the intrusion of technical components, although driver and passenger sides are still segmented with complex and highly detailed consoles.

A consistent design element from the previous Lagonda Vision concept are the suicide doors, placing an emphasis on the back seats. The concept also features a lifting roof section, making ingress easier still, into the concord-like rear seats. 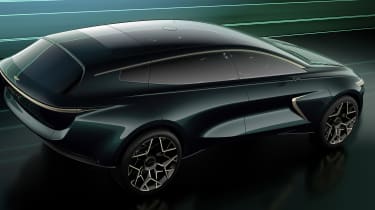 The exterior design, like so many electric SUVs, features a very cab-forward profile, revealing its non-traditional powertrain, but unlike many other concepts, does without the common fastback roof for a more squared-off tailgate section. This, in combination with the extended rear overhang gives the Lagonda All-Terrain a very distinctive profile in comparison to nearly all other luxury electric SUVs.

Granted, the All-Terrain’s revolutionary design must be taken with a pinch of salt, it is a concept car after all, but it does offer a look into Lagonda’s vision of the next generation of luxury car. It might also be further proof of Lagonda following Aston Martin in pushing the boundaries of its somewhat limited success, and into a real global player in the luxury car space. Aston Martin is expecting its new factory in St Athan, Wales, to be up and running at the end of this year when production of the incoming petrol-powered Aston Martin DBX SUV commences, the first all-electric Lagondas will enter production in 2022.