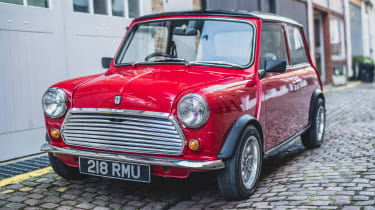 The fashion for producing electric powered versions of classic cars shows no signs of slowing down, with Swind revealing its zero emissions take on the original Mini, replacing its combustion drivetrain with a modern-day electric one. It follows hot on the heels of Jaguar Land Rover Classic’s converted E-Types and Aston Martin’s electric DB6 Volante.

Although enthusiasts may claim combustion engines provide a far superior driving experience, the Swind ‘E Classic Mini’ has gained performance and a multitude of features through its electric conversion. Due to the nature of electric motors, torque is available immediately, likely making the model feel rather nippy with a 9.2sec 0-62mph time proving far quicker than the Fifties original. Power comes in at 80Kw, equivalent to around 110bhp, providing a top speed of 80mph. Although range is usually an issue for electric cars, the E Classic Mini has a very respectable range of 125 miles - plenty enough for its intended use in the city.

The floor-mounted battery pack provides much improved centre of gravity and weight distribution, enhancing the model’s signature go-kart handling, and despite the addition of a heavy electric drivetrain, weight is only up 80kg on the original car, with a total weight of just 720kg. It also features regenerative braking so you can recoup some charge during deceleration. The brand says the model has undergone over 10,000 real world miles of testing to ensure the powertrain can stand up to everyday use. 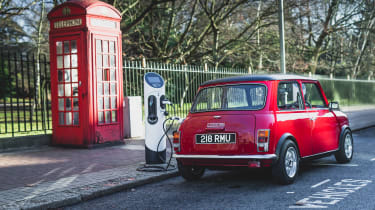 New features include an increase in luggage capacity to 200 litres, thanks to the removal of the fuel tank, USB charging ports, underfloor heating, heated leather seats, heated front and rear windscreens, an infotainment system, power steering, a sliding fabric roof and air conditioning. You’ll also have the benefit of zero congestion charge fees if you’re in London, which is nice.

Swindon Powertrain’s managing director Raphael Caillé said “The classic Mini has such a special place in people’s hearts, not only in the UK but around the world. The packaging of Sir Alec Issigonis’ 1959 design was truly ground-breaking and now we are making it relevant again.”

The Swind E Classic Mini doesn’t come cheap, starting at £79,000. The model will take six months to produce, but can be ordered in bespoke paint colours in either left or right-hand-drive configurations. Order book are open now, but you’d better hurry, as only 100 units will hit the road.