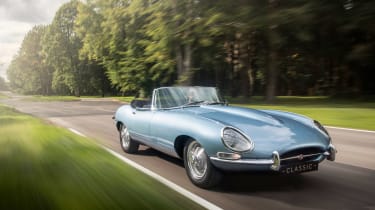 The classic series 1.5 roadster, which appears outwardly standard, features a powerful electric powertrain in place of the original XK inline six, and could easily be mistaken for a pristine original - provided its owner didn't start the car up and pull away.

Up front, where the 'six once lived, is a lithium-ion battery pack taking up roughly the same area and weighing roughly the same as the original engine. The motor and reduction gear transmission sit just behind, and still send power to the rear wheels through a new propshaft but original differential and final drive.

Overall weight is actually down 46kg compared to an equivalent standard car, but Jaguar says the weight distribution is unchanged and electric drive aside, the E-type Zero supposedly drives much like the original car. As the structure remains completely unchanged, it would also be feasible to return the car to standard with little effort should it be required. 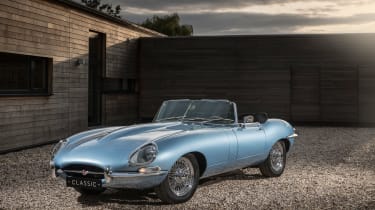 The motor itself develops 220 kilowatts - 295bhp in old money, though kilowatts are likely to become a common figure as electric vehicles become more prevalent - around 30bhp more than the original inline six. As such, it's around a second quicker to 62mph than a fighting fit original, taking 5.5sec.

It could be quicker still - there's plenty of performance potential with electric power - but Tim Hannig, director at JLR Classic, says power has been limited to provide an 'optimal' driving experience. The subtext is that an otherwise standard E-type chassis might not be best suited to the huge power and torque of a more potent electric motor...

Some componentry has been borrowed from Jaguar's upcoming electric production car, the i-Pace, while Jaguar quotes a real-world range of 170 miles from the 40kWh battery pack - which puts it roughly on par with several production models from mainstream manufacturers.

Externally there's little to give the game away that this is anything but a standard car, with the charging port hidden away underneath the standard fuel filler flap and LED headlights looking much like the original units. The changes are more apparent in the cabin, where much of the original dashboard has made way for a (slightly tasteless) carbonfibre panel with TFT instruments and a central touchscreen.

Likewise, the centre console, finished in aluminium, has Jaguar's familiar rotary-style drive selector rather than the thin ball-topped wand of a gearlever - though a classic cable-operated handbrake remains, as does the beautiful wooden-rimmed, chrome-spoked steering wheel. 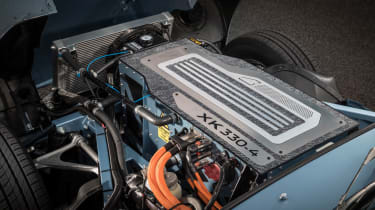 Intriguingly, Jaguar Land Rover Classic notes that because its venerable XK straight-six was used in such a huge variety of models between 1949 and 1992, the electric conversion could be carried out in any of the models that used it - so anything from an early XK 120 to an early-90s XJ6 saloon.

It might be sacrilege to some of course, but the conversion does have the potential to give new lease of life to several classic Jaguar models. No cost is quoted, but we'd be surprised if a few wealthy customers don't take the plunge.