Impossibly rare and beautiful, on the limit in the magnificent E-Type; watch our video here 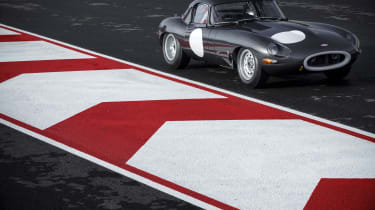 The recently formed Jaguar Heritage department are creating the six ‘missing’ Lightweight E-Types. They’re FIA approved to race in historic championships, built with stunning attention to detail and cost ‘deep into seven figures’. The most expensive Jaguar ever, then. The best? We drove Car One on the Navarra circuit in Spain to find out.

A ghost from the past made real. The original ‘Special GT E-Type’ project was devised in ’63. The steel monocoque and body of the E-Type would be replaced by hand made aluminium panels, spot welded and riveted together. The engine would be a dry-sumped aluminium block version of the 3.8-litre ‘XK’ straight-six. The resulting Lightweights were homologated at 960kg and 18 were to be built… In ’63 and ’64 just 12 were delivered. Six chassis numbers assigned to Lightweights were left dormant and remained blank in Jaguar’s own ledgers. Now Jaguar Heritage – a relatively new operation opened under JLR’s Special Vehicle Operations umbrella – has revived those chassis numbers and will complete the original intended run.

So the basics are 960kg dry or around 1040kg with fluids and fuel, around 340bhp and 280lb ft from a brand new 3.8-litre straight six (you can choose Lucas mechanical fuel injection or carbs, just as you could in ’63) and full FIA homologation for historic racing. The price? Well into seven figures. But then an original would probably set you back around £6-million… 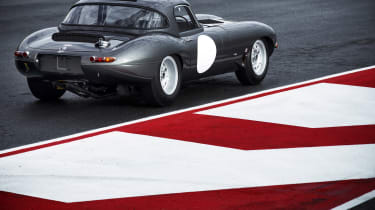 The new Lightweights are hand built, first at Jaguar’s Whitley plant, where the aluminium panels are shaped and riveted and spot welded together and mated to the tubular engine subframe. Then the chassis is taken to Gaydon for paint and finally the car is married to its drivetrain and finished at Browns Lane, just yards from where the originals would have taken shape. It’s a meticulous operation and these new Lightweights are built with a precision and quality that is way beyond early 60s racecar standards.

Of course the real challenge with the Lightweight was to make something authentic without blueprints or detailed design drawings and to recognise that each of the original cars was unique and have since been developed and honed for modern historic racing. Jaguar digitally scanned Car 12’s inner and outer surfaces to get the perfect shapes and to see how the structure was built up. Instead of applying new technologies to take this structure and improve it’s rigidity the new Lightweights feature the same riveting technique and even share the exact spot welding patterns. When they were happy with one side of the Lightweight’s structure the digital scan was flipped to create two perfectly symmetrical sides… Back in the 60s this level of perfection was impossible.

The 3.8-litre straight-six – the aluminium block is by renowned specialist Crosthwaite and Gardiner - is mated to a four-speed all-syncromesh gearbox and Powr-Lok limited slip differential. Suspension is by double wishbones at the front and independent wide-based wishbones at the rear (where the drive-shaft serves as the upper link). Once again this set-up mirrors the original cars, with Koni shock absorbers controlling the torsion bar springs at the front and the four coil springs at the rear. The Lightweight runs on 15-inch wheels of 7-inch width at the front and 8-inch at the rear. Unlike the original cars the new Lightweights aren’t sold as road-legal machines (although perhaps some owners might go down that route) and hence run on Dunlop crossply racing tyres.

Exhilarating, exhausting, hot, physical, frustrating at times and elating at others. Above all it’s totally and utterly immersive. It’s been a few days now since I drove the Lightweight but I can remember every sensation – the weight of the unservoed brakes, the big thin-rimmed wooden steering wheel jiggling and pulling at my wrists, that beautiful gargling, coughing, howling engine and the sweet, long throw of that four-speed ‘box. And although it happened just a couple of times those moments when the Dunlop race tires started to slip and slide will live with me for a long time to come.

It’s just so exciting approaching the Lightweight as it idles noisily to get its vital fluids up to temperature. Swinging open the tiny door and then falling backwards into the driver’s seat can not fail to make you smile. Then, when you’ve wrestled to get your legs under that steering wheel and finally can sit straight and look over the long louvred bonnet you know the next few moments will be very different and very special. 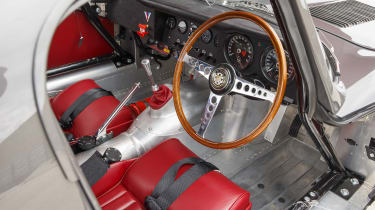 Car One is fitted with the Lucas fuel injection and although it gives cleaner top-end response than the carbs the set-up is pretty intolerant of anything other than binary throttle inputs. So there’s not much chance to ‘ease’ myself in. Just get in and drive hard. Fortunately the Lightweight has no nasty surprises. The rack and pinion steering (unassisted, of course) requires a bit of muscle but it wriggles and buzzes with feedback and you can feel just how much grip the front tyres have left at any given millisecond.

The circuit we’re on is a tight corner of the Navarra track and so it’s easy to breach the Lightweight’s limits. There’s a little understeer in the slow hairpins – not helped by the engine not revving cleanly below 3500rpm – but whenever you can turn-in a bit faster there are hints of just what fun this car could be. It needs a fast flowing track and the way it floats into a gentle drift once suggests it would be magical in faster 3rd and 4th gear corners. Car One is bought and paid for so I completely understand why our taste of the car isn’t at Spa (although that’d be nice!) – but I can’t help thinking about that place when I’m driving it. Just imagine… that’s the stuff of which £1-million dreams are made.

Well, it lacks the acceleration of a LaFerrari, the brakes are nothing like as good as a P1’s and the 918 Spyder is just so much more usable. Of course, I’m joking, but just what do you compare the Lightweight with? It’s a fabulous car built with stunning dedication and although it’s mightily expensive it’s also a passport to a whole world of historic racing thrills.

The new Jaguar Heritage department will undertake servicing, restoration and parts supply to older Jaguars and become something akin to Aston Martin Works. The work done on the Lightweights will also create new steel panels of exceptional quality for E-Type owners and perhaps a run of new ‘normal’ E Types could follow.