Long-range speed cameras launched to spot offences from 1km away

Gloucestershire Police trialled the system across 35 sites, detecting 1325 offences in a single month 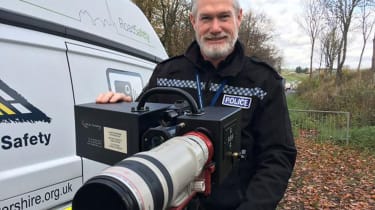 In order to spot driving offences up to two-thirds of a mile away and make better use of police time in the process, Gloucestershire Police trialled a camera system across 35 sites along the A417 in November of last year, spotting 1325 offences in total.

Some 1293 of the 1325 offences spotted by ‘the Long Ranger’ were of the speeding kind, with ten drivers caught driving in excess of 100mph, the highest being 126mph. And it’s not just speeding offences the cameras are capable of picking up, with tailgaters, mobile phone users, seat belt offenders and number plate infractions also on the agenda. From the month trial of the system, 52 warnings were given, 12 vehicles seized, a positive breath test was taken, one drugs wipe proved positive and one weapons seizure was also undertaken.

Gathering data from over 2000 drivers, the RAC found that 59 per cent were in favour of the new system, the majority of which stating that they’d like more mobile phone users to be punished for the offence. Others cited tailgating, middle-lane hogging and lack of seat belt use. However, catching speeders wasn’t a top priority for those favouring the system. Some 28 per cent of participants opposed the system and 13 per cent didn’t express an opinion. Forty four per cent of those opposing the system said they felt the long-range cameras were unfair as they can’t be seen in advance, while 35 per cent were concerned about privacy and 13 per cent quite simply didn’t want to be caught speeding.

RAC road safety spokesperson Pete Williams suggested the reason drivers support the cameras is because they ‘are used to speeding being enforced by a variety of means and are frustrated a similar focus is not employed to catch those they regularly see committing other motoring offences’.

Despite the system’s ability to catch drivers committing other offences and the public’s clear desire to have other laws more strongly enforced, Williams did go on to say that the camera’s ‘primary use will no doubt be to catch speeding drivers’.