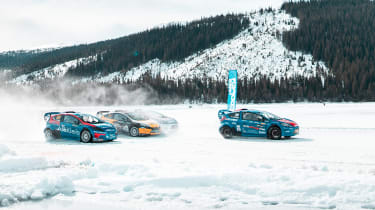 Based on the Discoverer road tyre revealed at this year’s Geneva motor show, a studded rallycross tyre has been debuted by American tyre manufacturer Cooper Tires at RallyX on Ice in Sweden.

Although the cars used at this year’s event weren't full-fat, 600bhp Supercar-class models, the new stud patterns and tyre widths are set to make possible the use of more powerful racers on ice circuits in upcoming seasons. Testing found that Supercar-class cars currently cause too much wear on the ice, considerably shortening the usable window for the track surface, but that a wider, less abrasive tyre like the new Cooper Tires product could solve this problem. The brand hopes to see the use of Supercars on ice circuits from 2020.

> FIA Rallycross 2019: everything you need to know

The cars seen this year at RallyX on Ice were the lesser RX2-spec models, although they're no slouches. Each of the twelve cars ran the same 305bhp, 221lb ft, naturally aspirated Ford Duratec four-cylinder powerplant. Power is transferred to the icy ground through a six-speed sequential gearbox and an all-wheel-drive system. Each car weighs just 1100kg too, making for an impressive power-to-weight ratio of 282bhp per ton. 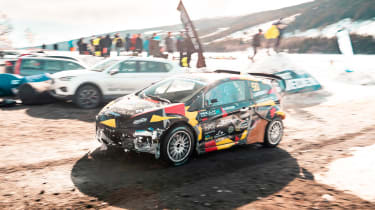 Replacing the narrower, 16-inch tyres of last year, the new 17-inch studded rallycross tyres contain over 400 studs in a new layout for optimal grip and track longevity. The addition of more studs and a wider tread only adds around 6kg per car over a standard dry or wet set-up.

The next few years might bring more than a simple change of tyres to World Rally Cross, with the impending introduction of all-electric powertrains hanging over the racing series. Speaking at RallyX on Ice, WRX champion Andreas Bakkerud said he felt that electrification was most certainly on its way, and that with the series’ short, sprint-style races and need for rapid acceleration, if any race car would work in electric form, it would be a rallycross car.