FIA Rallycross 2019: everything you need to know

It may not have the glamour of Formula 1, but rallycross can more than hold its own in the hierarchy of world motorsport 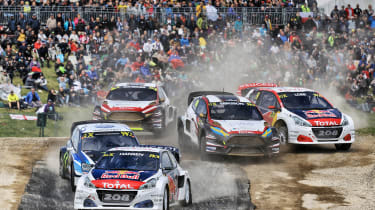 There’s a clip on YouTube of Italian rally driver Gigi Galli negotiating a tarmac hairpin with his usual flair in a Mitsubishi Lancer Evo VI. He pitches the car broadside before the turn even starts, his car taking up the full width of the road and almost pointing back where it came from as it enters the hairpin, before sliding through the corner and onto the following straight. Imagine that same turn, but on dirt, and while overtaking five cars in a single hit.

That moment, supplied by Kevin Eriksson at the German round of the 2016 World Rallycross Championship, is rallycross in a nutshell. It’s long been an exciting spectator sport, really taking off when drivers like Will Gollop and Kenneth Hansen campaigned 6R4s and RS200s, but in the age of instant gratification, there’s never been a better time for it to thrive. The 2018 season began on April 14th in Spain, unfurlling across Europe and Scandinavia, North America and South Africa, with each event comprising four qualifying heats, two semi-finals and a final. It drew to a close in November with Johan Kristoffersson taking the win - the 2019 season begins on the 5th of April in Abu Dhabi. 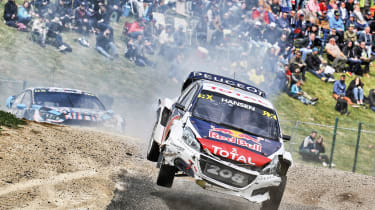 Three to five cars take part in each four-lap heat, while semi-finals and finals pit six cars against each other for six laps. As an FIA series, World Rallycross is young, having started in 2014, but fierce competition means we’ve already seen four different teams and three different drivers triumph. The sport is big business, and over the following pages we’ll tell you all you need to know about it.

The top tier of Rallycross – of which master overtaker Kevin Eriksson and nine-time World Rally Champion Sébastien Loeb are a part – is the Supercar class. The cars are steroidal, WRC-like machines based on familiar hatchbacks, albeit ones that put down the best part of 600bhp through sequential gearboxes and all-wheel drive. They may look like their WRC counterparts, but this comparison of a Citroën C3 WRC and Peugeot 208 WRX reveals the differences.

Silverstone is the newest venue on the World Rallycross calendar, taking over from one of the longest-running circuits in the sport – Lydden Hill in Kent. It’s a controversial move, but the sport’s popularity is to blame: growing attendance requires better facilities and suitable infrastructure in and around the circuit. Throw in the restrictions of local authorities around Lydden, and Silverstone’s international-level infrastructure and freedom in terms of space made it an obvious choice for 2019 and beyond.

A World Rallycross circuit’s surface must be at least 35 per cent, and up to 60 per cent, ‘sealed’ – in other words asphalt, concrete or similar. The remainder is unsealed, usually dirt or gravel. Silverstone has opted for just 39 per cent sealed, which puts it among the more dirt-heavy rounds. Work began on the track in mid-2017, so the surface has had some time to weather in – a process that can be artificially enabled, but there’s no substitute for the real thing.

Initial planning revealed that the most suitable place for the new track was within the Stowe complex, formed from two of the old runways and sitting between the pit and Hangar straights. The track length is 970m (the FIA regulates 800 to 1400m) and packs a pair of jumps – each given suitable space to ensure good take-off speed and room for cars (which may be side-by-side) to land safely. Subsequent corners have a sealed surface to improve safety. 3. Joker lap

FIA World Rallycross rules demand that each car must take a ‘joker lap’ route once per race. This typically adds 2-3 seconds to a lap time, and the joker section is separated from the main circuit by safety barriers. Cars rejoining the main circuit should be doing so at the same speed, and neither entry nor exit to the joker section should be on the racing line. Silverstone’s joker is between turns seven and ten and features a left-right chicane through a sealed-surface section.

Silverstone’s layout is the work of Driven International, which has designed circuits for everything from karting to top-level FIA events. During the design process drivers weren’t consulted, thus reducing the risk of tailoring a circuit to a particular driver’s tastes, but Silverstone did get feedback from BTCC champion and former rallycross driver Andrew Jordan. Only a few drivers have tried the circuit, but feedback has been generally positive.

How to be a rallycross driver

The right-rear tyre of this Peugeot 208 GTi would get you pulled over in minutes if you were foolish enough to use it on public roads. Its completely bald counterpart on the left-hand side would probably have you thrown in the clink without trial. Give the average oblivious motorist a few laps around the sprinkler-doused gymkhana course at the Peugeot Driving Academy in Nivelles, Belgium, and you’d never again need to remind them to put new rubber on their family wagon. On the damp surface, the 208 oversteers like an AC Cobra on remoulds the instant the rear tyres find water. It slides with particular voracity when turning right.

Luckily, a cheerful Swedish family has turned up to help me make sense of these unusual handling characteristics. Kenneth Hansen, his wife Susann and his sons Timmy and Kevin are the rallycross family behind the eponymous Team Peugeot-Hansen, which competes in the FIA World Rallycross Championship. The all look surprisingly cheerful given they’ll soon be sitting alongside me in the passenger seat… 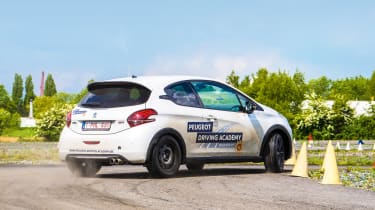 Look for the grip

The bald rear tyres might as well be made of ice on the arc of wet acrylic halfway through the course. The correct technique is to go in slow and straight. Predictably, I spin spectacularly on the first two runs.

Kenneth’s technique is much more enlightening. He… er, cheats. We pile onto the acrylic and instantly slide wide. Both outside tyres then hit the tarmac surrounding the curve and hook up, allowing him to get on the gas early and exit far quicker. ‘It’s not the way you’re supposed to do it,’ admits Kenneth, ‘but it’s where the grip is.’

In rallycross, the surface can change lap-on-lap. A driver’s greatest responsibility is to find that grip, even if it means an unconventional line – like going wide, hooking your tyre on a kerb, or just occasionally, leaning on a competitor.

While a wide line may be necessary sometimes, the ideal line is often much tighter. I treat the course much as a circuit – slow in, fast out, drive each corner as if it has an apex. The Hansens have a different approach: keep tight.

Kevin demonstrates this most vividly. He brakes latest of all, turns in early and aggressively, carries speed into the turn, and uses front-end grip to scrabble as close to the inside cones as possible. From there it’s straight onto the throttle, forcing the limited-slip diff to lock the nose into the chosen line, and using deliberate steering and throttle inputs to unsettle the tail if the nose starts to push.

The inside is, after all, the shortest path, and it’s the one your competitors will all be taking while you’re leaving a big gap on the inside on your traditional racing line.

Watching Timmy pile into the poor little road car and mercilessly thrash it around the course, torturing the tyres with his family sitting in the back, makes for hilarious viewing. But within one or two laps, all three had learned circuit and car better than I manage all day. Each had discovered just enough tarmac on the way into the first hairpin to take the preceding corner without even a lift and still have time to brake for the tight left-hander – in contrast to the confidence lift I was using.

In the 208 WRX – a car Kevin describes as having a ‘brutal’ power delivery thanks to its anti-lag system – this manifests itself as an ability to adapt to technical changes race by race, but also to the car’s deficiencies; Timmy notes that the team still has some way to go to match its rivals on the sprint to the first corner.

Listen to your spotter. Or don’t…

In a sport where so many cars spend so much time so close together, a spotter – much as in NASCAR – is vital, helping to make strategy calls, advising on joker laps, and giving you running details on your nearest competitor’s exploits.

The brothers like a constant stream of information, and everyone chips in: Kenneth and Susann usually act as the brothers’ spotters, but when Kevin destroyed his car in a qualifying round in Belgium in 2017, he took over as Timmy’s spotter for the final.

Of course, you could choose to ignore them. Teammate Sébastien Loeb explains that he prefers to receive information on joker laps and little else – perhaps some respite after spending much of his working life being shouted at from the co-driver’s seat by Daniel Elena…