Thanks to the new 2017 rules, rally cars haven't looked quite so tough in a long time 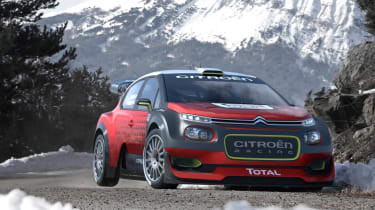 Citroen has revealed a concept version of the car it will field in the 2017 World Rally Championship - with the intention of reclaiming WRC dominance from Volkswagen, which has won three titles since 2013 and currently leads the 2016 season.

For 2017, as in Formula 1, the WRC’s regulations have changed, and cars competing in the series will be significantly different from those of the past five or six seasons.

Engine power increases to around 380bhp thanks to a 36mm permitted diameter for the turbocharger flange, aerodynamic regulations are more relaxed - which will lead to more dramatic bodywork shapes - minimum weight has dropped by 25kg and electronic differential control is now permitted. 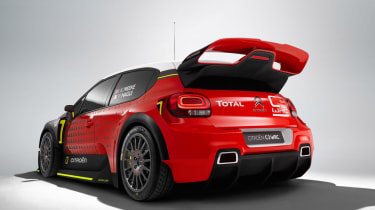 The aerodynamic changes in particular are clear to see in the new Citroen WRC Concept. Now based on the recently-unveiled C3 rather than the DS3, the C3 WRC Concept looks more like a race track refugee than a car designed for rough-and-tumble rally stages.

Enormous arches stretch the C3’s width out to the maximum 1875mm of the regulations and the car has grown by 55mm in length, most of that contribution claimed by the enormous rear wing and deep front splitter. The new C3’s characteristic Airbumps, however, are nowhere to be seen - surely an oversight for a car whose bodywork may well take plenty of punishment on the average rally stage…

While it’s too early to tell whether Citroen can regain its previous success in the series - with eight manufacturers’ titles and 96 wins to its name - Volkswagen will certainly have to pull out all the stops to make its Polo WRC look more dramatic than its French rival.