French supermini grows up, but not without a hint of Cactus-style flair 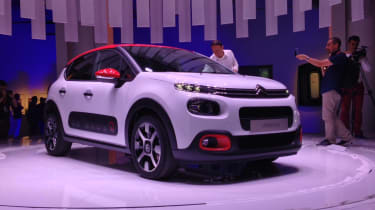 Citroen has revealed the latest iteration of its C3 supermini, set to go head-to-head with class rivals including the Ford Fiesta, Renault Clio and Volkswagen Polo.

While the last C3 played things safe - the more upmarket and visually stimulating DS 3 has proved far more popular in the UK market - the latest C3 takes a leaf (or perhaps a spine) from the Citroen C4 Cactus, with more adventurous, youthful styling and the return of the Cactus’s ‘Airbumps’.

The new C3 is recognisably a modern Citroen, with a wide grille flanked by two headlight layers. It results in a fairly chunky, SUV-like appearance to the front end, but in profile there’s a curve to the roofline that’ll be more recognisable to those familiar with the previous two generations of the C3 nameplate. 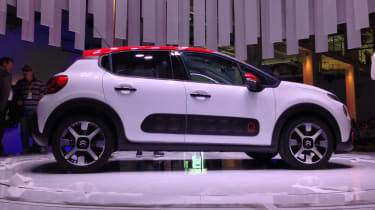 It’s clear that Airbumps - the polyeurethane, air-filled pockets that line the sides of the car - are becoming a signature Citroen design feature, having first made their debut on the characterful C4 Cactus. Here they’re an option - think of them as glorified door rubbing strips - but certainly add to the character of the C3.

The rear has echoes of other Citroen models, most notably the C1, as well as a hint of the DS 3, while the alloy wheels are cribbed from the Cactus and the car’s colour lines, such as the white, black and red seen here, are very much modern Citroen features.

More Cactus inspiration can be found inside, with features such as the luggage-strap door handles making a reappearance, as well as various trim options (including paint, textiles and plastic) for the dashboard. Bright colours and wide, comfortable seats are also a draw.

In some ways it’s a shame to see the Cactus’s unique attributes diminished through use on other models, but as DS moves upmarket then Citroen will continue to stand for simple, thoughtful charm in future models - C3 design chief Andy Cowell says elements of the C3, including the wide grille, split-layer lights and airbumps, will 'evolve' for different Citroen vehicles. 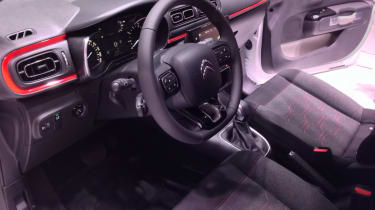 As with other Citroens (and DS models), engine choice includes petrol (in the form of PureTech-badged models) and diesel (with BlueHDi badging). The petrols are compact three-pots (ranging from 67 to 108bhp) while the diesels comprise 74 and 99bhp versions. All are manual so far, though a six-speed auto is on the way.

Underpinnings are broadly similar to that of the current DS 3, so it’s perhaps expecting too much for the new C3 to rise to the top of the class for incisive handling, and it's unclear as yet whether there will be a performance model in the range.

Speaking to evo, Citroen's head of future products, Pierre Monferrini, said the Citroen brand is very much about "dynamic comfort". 'We don't build sofas' he said, and while he wouldn't confirm the existence of a performance variant, he wouldn't rule it out. Given the C3 will be Citroen's new entry in the World Rally Championship, a hotter C3 is likely.

But look beyond dynamics and the new C3 is sure to hold some appeal when it goes on sale. Further specification and pricing information - it's expected to cost a similar amount to the current car, so expect a starting price around the £11,000 mark - will be announced in due course.