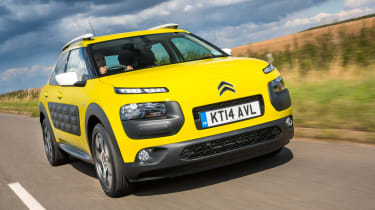 Although unable to invoke, in any way that will make your heart beat faster, ‘the thrill of driving’ (it’s a personal thing, I know, but trust me here), the Citroën C4 Cactus isn’t without a certain ‘evoness’. It splits three ways. First, for a medium-sized crossover, it’s properly light at just 1020kg, some 700kg less than the regular C4. Second, what kit remains from the radical paring-down process is useful and well-designed. And third, in certain of the darker colour combinations, it looks like it’s auditioning for a part in the next Robocop film. Let’s call it future dystopia chic.

If Citroën intends to re-engage with the quirkiness that once marked it out, the Cactus isn’t a bad way to start. Most obviously, the car’s semi-quilted appearance inhabits that squeaky-tight gap between controversial and cool. Citroën calls the plastic protector pads on the sides, nose and tail  ‘Airbump technology’ and, as a styling conceit, it draws attention to the car as effectively as if it had ‘look at me’ written in neon tubing across the roof. But it’s functionally smart, too, the air-filled thermoplastic polyurethane pockets re-inventing the idea of the simple rubbing strip in IMAX 3D. Citroën reckons that errant shopping trolleys in supermarket car parks will simply bounce off it.

Citroën has dared to be just as different on the inside. Forget the usual chunky, slightly macho architecture most designers feel appropriate for anything with a marginally raised ride height: the Cactus’s cabin looks more like something you’d find in the pages of an IKEA catalogue with comfy sling-style sofas for seats, spare dashboard design with knowingly retro digital instruments, a tablet-sized touchscreen in the middle and numerous nods to designer luggage that impart a feeling of classy functionality. It’s an impressively roomy thing, too, especially in the front. By relocating the passenger airbag in the roof, that long-undervalued stowage compartment, the glovebox, gets an XXL makeover.

Things aren’t quite so much fun in the back. Again there’s bags of leg-, head- and shoulder-room and the rear bench is squishy and comfortable, but there’s no split-fold for the time being and the rear side windows hinge out rather than wind down (part of the extensive weight-saving programme). Big boot, though: 358 litres expands to 1170 litres with the single-piece backrest folded flat.

The lightness of the Cactus manifests itself on the road in a couple of ways. First PSA’s direct injection petrol 1.2 three-cylinder turbo engine feels a good deal gutsier than its modest 109bhp would suggest. It’s a thrummy and energetic performer that belies its modest capacity with decent low-speed tug and perfectly adequate roll-on acceleration. Its flexibility cuts down on cog-swapping, too, which is no bad thing as the light but slightly vague gearchange isn’t exactly addictive.

The ride quality is, though. The Cactus always feels comfortable and composed in a way that the best French cars always used to. It’s reasonably agile, too, and so long as you don’t expect hot hatch levels of entertainment, it can be hustled along at a respectable lick. It’s certainly a long way removed from the soggy compromise some crossovers turn out to be.

C4 Cactus pricing runs from £12,990 for a 74bhp, non-turbocharged version of the 1.2-litre three-pot, to £18,190 for the e-HDi 92 in top-end Flair trim, with a six-speed automated manual transmission and 78.5mpg combined economy figure. Automatic Cactus models also get a pseudo bench-seat arrangement in the front, facilitated by a push-button gear selection arrangement on the dashboard.

To drive, the Cactus isn’t quite as arresting as it looks but it is a car that has its priorities straight. And those we like.