Passenger gets in, pulls door closed, door bounces open again. Passenger repeats the process several times. Seat belt caught? No. Coat caught? No. All in order, captain. But doors, set to manual and cross-checked once again, are still suffering a technical fault and our engineers are working on it right now. 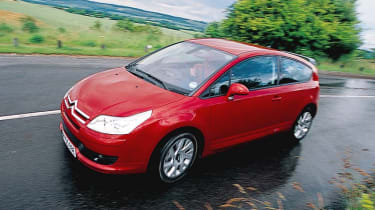 Passenger gets in, pulls door closed, door bounces open again. Passenger repeats the process several times. Seat belt caught? No. Coat caught? No. All in order, captain. But doors, set to manual and cross-checked once again, are still suffering a technical fault and our engineers are working on it right now.

I get out, wander round to the passenger side, and there's the problem. The pull-out door handle has stayed pulled out. It's sticking. Handle pushed back in, door closes perfectly. Two days later the driver's door does the same thing, and the passenger door has also repeated the pantomime. A good squirt of WD40 fixed it, but it shouldn't have happened in the first place.

And now, an observation about the price we pay for the strength and safety of modern cars. I went to buy a wheelbarrow recently, large but not vast. I assumed it would be swallowed easily by the C4's boot if I folded the back seats down, but space was surprisingly tight thanks to the rear suspension turrets and all that bracing around the back seat and the rear pillars. My old 205 GTI (yes, he's mentioned it again) is spacious and load-ingesting by comparison, but is made of tinfoil and has as much impact protection as a Chinese takeaway carton. Win some, lose some.

It was interesting to read Porter's take on the adjustable hedgehog C4 last month. He's right about the grabby brakes, obviously, and I agree that the springy gearchange is hardly an instrument of mechanical precision and interactive joy. But the perception of engine power is a tricky one. At first you do wonder where most of the 180bhp has gone, but the power delivery is sufficiently even across the speed range that there's never a bombastic onslaught of urge. That makes it feel less quick than it actually is, which does a supposedly sporty car no favours.

It seems to me that the C4 VTS's basic ingredients are fine, but it needs the attention of an engineer who properly understands why some cars feel good and others don't. The result would be better throttle mapping, a tighter gearshift, progressive brakes and probably more supple damping. These are the things that stand between the C4 and the driving delight offered by, say, a Golf GTI.

Finally, Citroën has sent me the NaviDrive handbook, missing since new. Forty-seven pages of deep technostuff that needs a degree in computing to be understood. There are treasures to be found in here, but I'm scared.