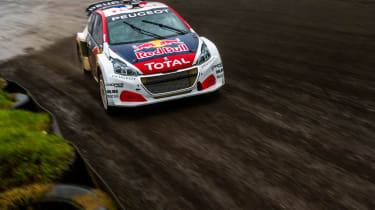 Peugeot will unveil a new version of its World Rallycross 208 at the first round of 2017 championship in Barcelona. The new updated 208 will be raced by Peugeot’s top drivers, nine time World Rally champion Sebastien Loeb and Swedish driver Timmy Hansen.

Red Bull is still the main sponsor for the 2017 208 WRX, as it has been since Peugeot has been entering a 208 in the championship in 2012. But, rather than the predominantly blue livery of last year’s car, the 2017 car is now mostly white. It still features Red Bull’s brand colours – red, blue and yellow – but the brighter design on the latest car reminds us of Peugeot’s old rally liveries seen on the 205 T16 in the 1980s.

> Read our review of the Peugeot 208 GTi here

It isn’t just the paintwork that makes the new car look different; its arches have been stretched out further, too. Not only has this made the 208 look even more aggressive it’s also now the maximum permissible width that the WRX regulations allow. 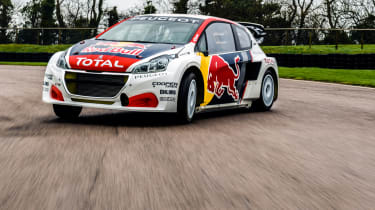 Underneath the swollen carbonfibre 208 bodywork there are even more changes. The suspension and dampers have been improved and the engine now features a one-piece sump to increase the motor’s strength.

The old 2016 car won’t be resigned to the scrap heap just yet, though. Kevin Hansen, the reigning FIA European Rallycross champion will move up to the international series to join his big brother Timmy Hansen and Sebastien Loeb. Rather than use the latest 208 WRX, the rookie will campaign an improved version of 2016 car with a paintjob to match the brand new cars.

Rallycross has gained popularity over the past five years. What was once a low-key sport that young drivers used to start their careers before moving onto touring cars or rallying has become big budget, high profile and prestigious motorsport. Not only has the championship attracted one of the world’s most successful drivers with Sebastian Loeb, rally stars Petter Solberg and Gigi Galli as well as circuit drivers Jacques Villeneuve, Yvan Muller and DTM champion Mattias Ekstrom have all got behind the wheel of WRX cars. 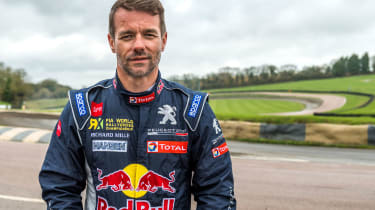