With enough power to make even Bugatti prick up its ears, the US tuner has had its hands on the Chevrolet Corvette ZR1 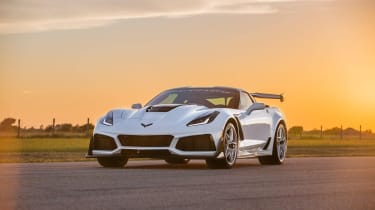 Another week, another mad creation from Hennessey Performance. The Texan tuning company has been pumping more power into European metal in recent months, but has reverted back to its roots with the creation of a 1200bhp Corvette.

As with all recent power upgrades from the company, it’s available in three stages, ranging from the sluggish HPE850 package, to the HPE1000 and HPE1200 kits – you can probably hazard a guess as to what those numbers stand for.

The standard car is already a rather brutal machine, producing a staggering 744bhp and 715lb ft of torque from a 6.2-litre supercharged V8. It also features some pretty hefty aero kit for maximum downforce, making it the fastest Corvette ever produced. Of course, that’s not enough for Hennessey... 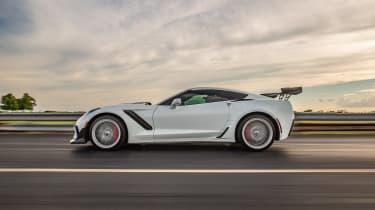 The HPE850 package gets you 850bhp and 715lb ft of torque, thanks to the addition of a high-flow induction system, long-tube stainless steel headers, new midpipes, high-flow catalytic converters and an ECU tweak.

The HPE1000 package includes the same modifications seen on the HPE850 kit, with the addition of a custom camshaft, upgraded supercharger, upgraded gearbox and various other reinforced components. This will give you the magic 1000bhp figure and a tarmac-tearing 966lb ft of torque.

Topping the range is the HPE1200 package, for 1200bhp and a face-reorienting 1066lb ft of torque. As you can imagine, quite significant modification is required to bring the already-powerful ZR1 to this power level. The factory supercharger receives plenty of tweaks, alongside the addition of a high-flow throttle body, new induction system, custom camshaft, reinforced internals, long-tube stainless steel headers, high-flow catalytic converter and a reinforced gearbox to prevent it becoming a box full of metal-oil slush. To get the full 1200bhp, you will need high octane race fuel – the HPE1200 Corvette ZR1 produces around 1100bhp on standard 93 octane fuel.

Performance figures for each of the power stages are yet to be revealed, but with the standard 744bhp car sprinting from standstill to 62mph in just 2.9sec and hitting a top speed of 210mph, Hennessey-fettled machines aren’t going to be awfully slow. All packages come with a three-year or 36,000-mile warranty.

Pricing and availability is available upon request.