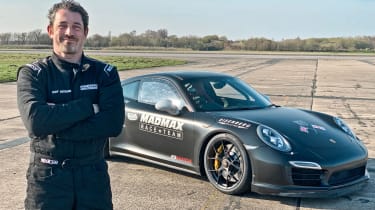 When you’ve come off your motorbike at a genuine 234mph, been presumed dead at the scene, broken 11 bones, been told you may never walk again, and spent three months in hospital and another three in a wheelchair, you’d probably consider chucking your daredevil pants in the washing machine and taking up a less perilous pastime. But not self-confessed speed addict Zef Eisenberg. A year after almost engineering his own demise he was back in the saddle of his rebuilt supercharged Suzuki Hayabusa and racing at Elvington, the scene of his crash.

Following months of preperation, Eisenberg succeeded in breaking both the flying mile and fastest speed records in both bike and car at Pendine Sands in South Wales, setting a two-way average of 187.962mph and hitting a top speed of 206.4mph in his modified Porsche 911 Turbo. The double-whammy is a tribute to one of Eisenberg’s heroes, Sir John Surtees, the only man to have achieved world championships in cars and on bikes; the choice of Pendine Sands was inspired by another of his heroes, Malcolm Campbell, who in February 1927 set a long-standing record there of 174.2mph in the famous Bluebird.

Eisenberg has previous at Pendine. In May 2018 he set the land speed record on sand for bikes, achieving 201.5mph: it was the first time any vehicle had breached 200mph on the Welsh beach. He also holds the Guinness World Record for a gas turbine-powered bike – 226mph, but on a hard surface. And in March 2019 he was attempting to hit 200mph on ice, on a frozen lake in Sweden, when a tyre exploded at 176mph and sliced the bike’s radiator open… 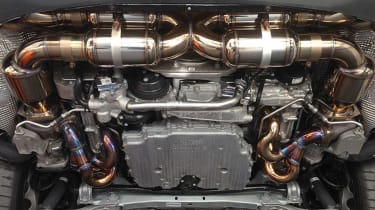 The switch to four wheels was in response to a comment from a friend that Eisenberg should get some car records under his belt having been so successful on bikes. ‘Some people might have laughed off the suggestion and done nothing about it,’ remarks Eisenberg, ‘but with me, once a seed like that is in my head it quickly grows into an oak tree.

‘I was soon investigating the right car for the job. It had to be four-wheel drive because there’s so little traction on sand, and it had to have excellent tuning potential – to achieve 200mph on tarmac within a mile would need 750bhp at the wheels, but there’s so much resistance and tyre slip on sand that we calculated we’d need at least 1000bhp at the wheels, which is a crazy 1200bhp at the engine.

‘We [Eisenberg’s own MadMax race team] briefly considered a Nissan GT-R but didn’t think its aero package was up to the task. The 911 Turbo has great aero off-the-shelf and is a very cost-effective car.’ 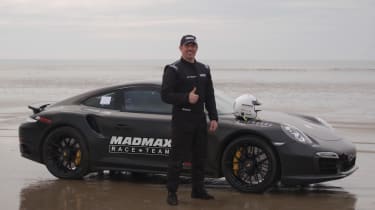 The Porsche is much modified – with the work carried out by ES Motor – though remains road legal. The capacity of the flat-six has been pushed out from 3.8 to 4.1 litres and it runs Porsche’s motorsport heads to allow higher revs: all the internals have been upgraded and it has been converted to run on E85 fuel to reduce combustion temperatures. The turbochargers are three times larger than OEM and there’s water/methanol injection to the inlet manifolds to cool the air being rammed in by those turbos.

Dodson Motorsport has built a custom strengthened clutch for the car that allows it to still use its standard PDK gearbox. ‘That’s important,’ says Eisenberg, ‘because on the sand you really want seamless power delivery, which the PDK offers.’

Bilstein dampers have been fitted for their adjustability: ‘We may need to raise the ride height to account for the conditions on the day, We could encounter seaweed or even jellyfish washed up onto the sand.’

Because of the need to fit a custom FIA-approved roll-cage, the Turbo’s doors have been replaced with carbonfibre items, while the standard seats have made way for competition buckets, so the car is 148kg lighter than factory-spec. ‘That’s not ideal,’ insists Eisenberg, ‘because on sand weight is your friend – ironically we’ll be using sandbags for ballast on the day.’

Eisenberg’s previous experience on the bike will be invaluable for the car record attempt, as he can’t practice in advance at Pendine. ‘I’ll be driving from the B&B to the beach and getting straight on with it.’ Part of what he knows already is to not try using full power until 150-180mph, lest the wheels start spinning, and to be mindful of sand choking the radiators and amassing on the inner surfaces of the alloys and throwing the wheels out of balance.

‘I’m in absolutely no doubt that this won’t be easy,’ confesses Eisenberg, ‘but if it was, everybody would be setting records.’