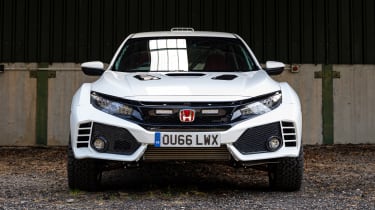 Sitting alongside another rather special, one-off 400bhp variant of the Honda Civic Type R came the rally-inspired concept from Ralph Hosier Engineering. Though we won’t see either model on our roads any time soon, they certainly demonstrate what the brand’s capable of, given free rein.

Both models made their debut at the 2019 SMMT Test Day at Millbrook Proving Ground in Bedfordshire, with the Team Dynamics Motorsport-developed car demonstrating the full potential of the FK8 Type R with BTCC-inspired parts. A new induction system, intercooler, exhaust and modified ECU have taken power to 400bhp and 368lb ft of torque. To cope with the increase in power, uprated Goodridge brake hoses, performance springs, adjustable anti-roll bars, semi-slick Dunlop tyres and lightweight 19-inch wheels have also been fitted. Despite all of this, it can still be driven on the road.

James Rodgers, team manager at Team Dynamics, said: ‘We’re familiar with the race-winning FK8. However, we wanted to showcase what can be extracted from the car with just a few light modifications. The standard car, which we call a race car for the road, is so competent that it really doesn’t take much to take it to the next level.’ 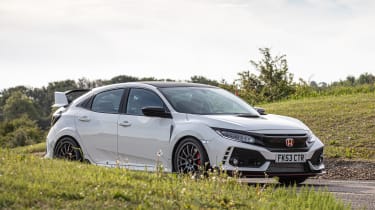 But the real star of the show is the ‘Civic Type OveRland’, developed by Ralph Hosier Engineering. Thanks largely to modified transverse links and a bespoke trailing arm mounting at the rear, ride height has been increased by 4 inches, with rather large 255/55/18 BF Goodrich tyres sitting in front of the equally purposeful mud flaps.

Though the brand took influence from various off-road competition and recreational vehicles from around the globe, the Type R’s anti-torque-steer Dual-Axis strut arrangement was retained, allowing its suspension to work as initially intended. Lightweight, rally inspired wheels and Championship White paint also help to finish off the appearance of the model. 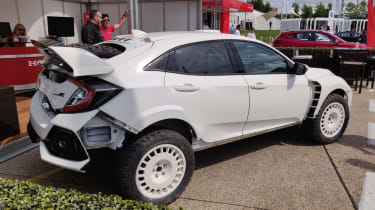 Owner of the company responsible, Ralph Hosier, said: ‘These two wildly different interpretations of the Civic Type R showcase the standard car’s attributes, but also reflect the advanced, sporty and playful nature of the entire Civic range. We have also had a fantastic opportunity to demonstrate what can be done with a road car.’

Performance figures for both models are yet to be revealed. However, the standard car can sprint from 0 to 62mph in just 5.7sec and go on to a top speed of 169mph thanks to its 2-litre VTEC-equipped, 315bhp, 295lb ft turbocharged four-cylinder engine.

There are no plans to put either model into production, but for lucky customers willing to pay the price, one-off versions will be produced.