The German tuner has worked its magic on the Mercedes-AMG G63 once again, adding power and aggressive styling 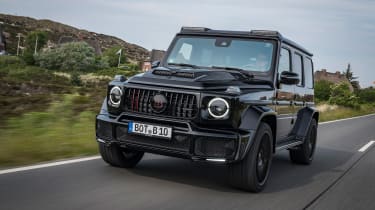 It doesn’t seem long since Brabus last revealed a honed variant of the G63, and it’s back again, with two more. The 800 Black Ops and 800 Shadow both feature the same modifications under the bonnet, but see differences on the surface.

As is common with Brabus products, engine modifications are no simple tune job, but instead involve the introduction of entirely new hardware. The G63’s already-powerful 4-litre twin-turbo V8 receives two new Brabus turbochargers, featuring modified and reinforced components for an increased maximum boost pressure of over 23 psi. This brings 212bhp and 110 lb ft power gains over stock, taking figures to 789bhp and 737lb ft for a 4.1sec 0-62mph time and 149mph top speed. Both models also come with the brand’s stainless steel valved exhaust system for added theatre.

Set to make its debut at an event on Sylt Island in northern Germany, the 800 Black Ops features Brabus’s Widestar widebody kit, adding four inches of width, 23-inch forged wheels, an all-black colour scheme (hence the name), and of course, an LED light bar above the windscreen for those late night off-roading adventures. 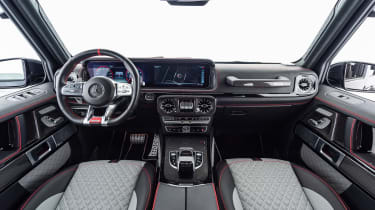 Modifications don’t stop there, with a plaque denoting its one of ten status on the passenger side grab handle, a new grey, black and red leather interior, plenty of Brabus badging, aluminium pedals, door-lock pins and much more.

Making its debut at Top Marques in Monaco, the 800 Shadow matches the tuner’s new limited-edition boat, being finished in the same gunmetal grey shade. Many of the same hardware changes as on the Black Ops car can be found. However, 23-inch forged wheels come as standard alongside a new Brabus rear wing, a carbonfibre wheel cover and a black, grey and red leather interior.