Meet the Typhoon – the £120,000 carbonfibre-bodied car that will lead TVR’s revival 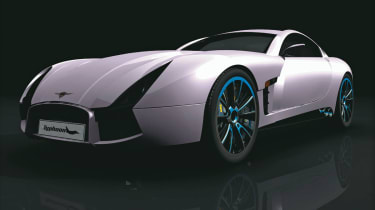 Reports of TVR’s death have been greatly exaggerated, and these are the first pictures of its new carbonfibre-bodied supercar, the Typhoon.

Powered by a supercharged version of TVR's 4-litre straight-six, further developed by Ricardo to produce 600bhp and 500lb ft, the Typhoon will be the fastest production TVR ever, and at around £120,000 the most expensive too.

Built to celebrate the firm’s 60th anniversary, the car will be officially unveiled at the Geneva show in March. It will be built in strictly limited numbers and only in right-hand drive, the lucky 60 customers taking delivery during 2007.

The Typhoon is the first TVR to be designed entirely by CAD, a move which has brought substantial aerodynamic advantages, enabling the new car to easily exceed 200mph, according to company sources. Expect a sub-4sec 0-60 time, aided by an uprated limited-slip diff and the adoption of the T56 six-speed manual transmission as used by the Corvette.

Like lesser TVRs, the Typhoon has a tubular steel backbone chassis with an integral rollcage, but like the ill-fated T400R/T440R (just one was built) and the later Typhon (of which three were made) the body panels and floor are constructed from carbonfibre, helping keep weight down to 1100kg.

Behind the 19in alloys are six-pot AP Racing callipers up front, and although there’s no anti-lock or traction control, TVR is looking to fit both to future mainstream models – expect announcements later this year. Other trick details on the Typhoon include adjustable Bilstein dampers, carbon-shelled Sparco seats and even satnav!

The Typhoon’s chassis is much longer than that of a Tuscan, allowing the fitment of genuinely usable rear bucket seats, though the truncated tail means that it’s actually shorter overall than the Tuscan. However, TVR is confident it will be even more imposing, with its Ferrari 599-aping stance and aggressive front-end, the distinctive grille of which will be shared by all future TVRs.

At around £120K it will be competing head-on with cars as diverse as the Aston Martin DB9, Lamborghini Gallardo and Ferrari F430.

To be successful at this level it needs to be very, very good. But the Typhoon’s biggest task is to convince the sports car buying public that TVR really is in safe hands.

TVR's future is still up in the air - a statement from the company released after Christmas indicates that the UK manufacturing arm, Blackpool Automotive, is to be sold off. It is unclear whether any deal will exclude rights to the TVR name and brand, so although we can tell you all the juicy details of the Typhoon we can’t actually reveal where it – and future TVRs – will be built, or even whether the cars produced by Nikolai Smolensky will still bear the TVR moniker.

Piecing together all the leaks and rumours, it looks almost certain that the manufacture of TVRs in Blackpool is finished, and increasingly likely that the Typhoon – and the T350, Sagaris, Tuscan and Tamora – will be built in Europe, with Italy's Bertone heavily tipped as a partner.

Ricardo Engineering was announced as a technical partner back in November (it has been developing the Speed Six engine to comply with Euro V emissions legislation), so we’d expect it to be charged with building the drivetrain, which will then be shipped out to the manufacturing facility and mated to the chassis/body.

Ricardo has a superb reputation and if it is developing the TVR-designed engines it can only be good news for customers and the future of TVR alike – warranty claims have been a thorn in TVR's side since the AJP engines were introduced in ’96.

TVR is set to announce its final plans on January 17 at a press conference in London. However, even with technical partners as respected as Ricardo and Bertone (assuming it will build the cars) sales success could yet hinge on whether potential customers will want to buy a specialist British sports car that isn’t built in Britain…