Caterham: Most powerful Caterham ever

Lighter, supercharged 330bhp version of CSR built to celebrate the 50th birthday of the Seven, but it’s only a concept – for now 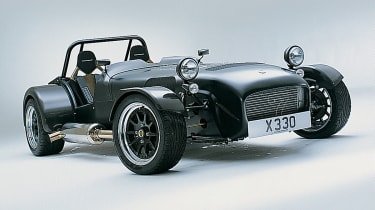 'We wanted to build a car to celebrate 50 years of the Seven and sow the seeds for our vision of the next half century.' As we chat, Caterham MD Ansar Ali is clearly excited about the X330, an engineering concept he gave the green light for just ten weeks ago.

It's comprehensively the most powerful car the company has built – the 330 refers to the peak horsepower figure it delivers at 7500rpm, the result of bolting a Rotrex C30-94 supercharger to the CSR's already spicy 2.3-litre Ford Duratec motor.

'I gave the engineering team permission to let their imaginations run riot for a one-off concept to be unveiled at our jubilee race event in June,' Ali continues. 'We needed a new shop window and this car has far exceeded my expectations. Customer reaction has been overwhelming.'

Such was the lack of time, the X330 hadn't turned a wheel before the Donington event, so it only ran 'bedding-in' demo laps. The engine will now be stripped to check its condition before a more rigorous test programme commences.

Ali reckons there could yet be more power to come, as the Rotrex unit is currently only running 0.9bar of boost. However, the team wants to ensure the usual levels of Caterham tractability remain before going any further, and besides, in a car weighing 530kg, 330bhp and 221lb ft of torque is plenty to be getting on with.

Weight has been shaved thanks to the use of lighter gauge steel for the chassis (which retains the rigidity of the standard CSR's yet is 15kg lighter), lashings of carbonfibre and new bespoke split-rim wheels from Image that trim 0.75kg from each corner.

'As well as being a headline-grabber, the X330 will act as a test-bed for us,' says Ali. 'We are working hard to reduce the cost of the whole range whilst increasing the quality of materials. Our centre of gravity in terms of sales is cars below the £25K mark, and there will be some carry-over to benefit that market. We are also evaluating bio-ethanol for the X330. In fact, it would have been fuelled this way from the outset had there been time.'

According to Ali there are no plans for a production version of the X330, but such has been the response that pressure will surely grow. If it were to be produced, the price would likely exceed £50K, but, as we have seen in the past with the JPE and R500, there's always demand for monstrously powerful, extreme and expensive Caterhams.

Unsurprisingly, initial plans for the X330 include attacks on established records, such as 0-100-0, the Nürburgring and even our own Bedford West Circuit lap time, and it is likely that the car will become a racer in the CSR Masters series. All of which will further heighten demand for a road version. So come on Caterham – you know it makes sense.