Special Ferrari built with the help of Schuey 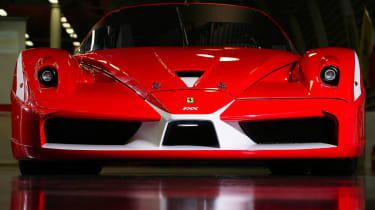 When the FXX project was first announced, it was set to run for two years, culminating at the 2007 Ferrari World Finals in Mugello, Italy, this October. Originally there were to be just 29 FXXs, but last year an extra car was made for a certain M Schumacher, who has become very active in the FXX programme.

Now Ferrari has announced that the programme is to run for another two years with an ‘evolution package’ – which it says was developed with the ‘invaluable support’ of Schumacher – being made available to owners.

The upgrade includes an uprated version of the 6262cc V12 engine that revs to a scarcely believable 9500rpm (some 1000rpm higher than before) to produce 860bhp, up 48bhp. The gearchange time has been reduced to a Scuderia-matching 60 milliseconds, all of which helps the FXX ‘Evo’ lap Fiorano some 2sec quicker than the old car – in just 1min 16sec.

A new rear diffuser and a revised active front spoiler control system increase downforce by 25 per cent. There’s also new telemetry equipment, more durable Bridgestone tyres and more efficient ceramic discs that help the pads to last twice as long.Fourteen track events are planned over the next two years, entry to which is included in the upgrade price of 185,000 euros plus VAT (around £151,000).