Lightweight GranTurismo built for the track, but it could spawn a road-going version too 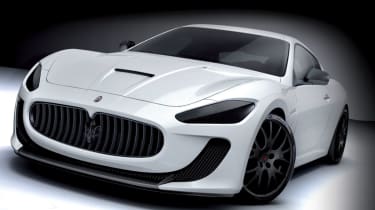 One company definitely not rocked by the market downturn is Maserati, which now boasts its biggest ever range of cars, thanks to the rapid rate at which it has been launching variants of its two core models, the Quattroporte and GranTurismo.

The GranTurismo has now been with us a year and a half, and the hotter S version, which rights the small but niggling wrongs of the standard car, has just gone on sale in the UK. But if the S isn’t hardcore enough for you, this new MC Corse version could be the answer.

It keeps the 4.7-litre V8 from the GranTurismo S, albeit mildly tweaked so that power rises from 433 to 444bhp and torque from 362 to 376lb ft. That may not sound a lot, but the big news is that the car’s weight has tumbled from nigh-on two tons to less than 1400kg, which should lead to a dramatic leap in performance.

The car is currently track-focused, with an FIA-approved chassis, roll-cage and fuel tank. The brake discs are 380mm at the front and 313mm at the rear, but with no ABS, while the cost of all that weight saving is a massively stripped-out interior and Lexan windows rather than glass. A future Trofeo racing car, then? Quite possibly – Maserati’s one-make series as well as GT3 and GT4 racing are all potentially within the MC’s grasp.

However, depending on the strength of GranTurismo and GranTurismo S sales, the MC Corse could also become a road-going ‘halo’ model that pushes the Maser towards supercar territory. It would no doubt regain a bit of weight in the process, with ABS, the odd airbag and a slightly less Spartan interior to match rivals such as Porsche’s GT3 RS. A bigger power-boost could accompany the change to compensate for the extra kg.

This isn’t the only new addition to the GranTurismo range, though; a drop-top is also on the way, and contrary to speculation about it being a Mercedes SL-rivalling coupe-cabriolet, it will actually have a fabric roof. Adding a heavy folding hard-top to a car that already weighs 1880kg would have proved detrimental to performance, so the news that it will be a traditional Italian four-seater soft-top is welcome indeed. Expect to see it at Geneva in March 2009.