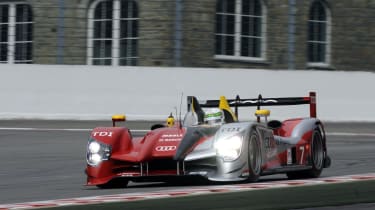 How do the major players at Le Mans prepare for the big race? They test the car for up to, and sometimes more than, 30 hours.  This year, Audi has conducted two 30 hours tests with the R15 TDi and Peugeot is thought to have completed the same type of test with their LMP1 challengers.  Aston Martin is also known to run their car for more than 24 hours in an epic pre-race test. The tests are often held in secret, but our spies tell us that the cars often perform the full 30 hours without any major hiccups. This year, Audi believes the tests have put them in a stronger position to challenge last year’s winners Peugeot.  In just over a week, we’ll find out if that’s true – follow all the action from the great race on www.evo.co.uk or evo’s exclusive free Le Mans iPhone app.