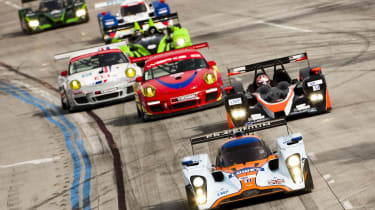 It’s going to be a different race this year – yes at the front Peugeot and Audi will resume their titanic fight for diesel supremacy, but if they wait until the traditional 4pm start they’ll already be an hour behind the rest. It’s World Cup year, so that means the race is brought forward by an hour to avoid the potential TV clash. The build up is going to look a little different too. At 14:15 all the cars will be lined up in the classic Le Mans start herringbone formation with all 168 drivers positioned on the other side of the track. The starting drivers will be fully kitted up waiting for the Clerk of the Course’s signal to rush across and belt themselves in. Okay, this won’t be a full return to one of the great traditions of the great race, but it should ramp the tension up a notch or two. Scrutineering was completed yesterday, and it’s now the quiet before the storm as the first free practice session kicks off tomorrow (sorry, must stop using football terminology) at 4pm, before the opening qualifying session at 10pm. So who do we reckon will be hot and who should you be looking out for? No question, LMP1 will be dominated by the factory Peugeots and Audis and this time the Germans will be doing everything in their power to reclaim the biggest prize in sportscar racing. These six cars are virtually in their own class, but don’t expect either team to dominate – we reckon it’s going to be very close and it could come down to the smallest of mistakes. Elsewhere in LMP1 the Aston Martin Lolas look strong, but it’s likely that the Zytek Ginetta that will attract most media attention as ‘our Nige’ takes on the twice round the clock challenge alongside his sons Leo and Greg. LMP2 will be equally hard fought, and of the three British teams in the mix we reckon the RML are best placed to challenge for honours. The Wellingborough-based team (just a stone’s throw from Evo Towers) have been performing well in their Lola HPD in the run up to the race, and with a line-up of Tommy Erdos, Andy Wallace and Mike Newton, they have one of the most experienced crews on the grid. We’ll be following their progress through the race, with regular live blogs - so fingers crossed for a good run. If supercars are your thing, then watch out for the GT1 category and in particular the Japanese team running a Murceilago. It will undoubtedly take the award for best sounding machine, so let’s just hope they manage more than the one lap they did last year. And last, but no means least we have GT2, where you’ll find Giancarlo Fisichella, Jean Alesi and Mika Salo in Ferraris, and multiple world touring car champ, Andy Priaulx in one of the works BMWs. It’s a class of 18 cars and everyone is strong enough to win. That’s just how we like it, it’s going to be an amazing race.