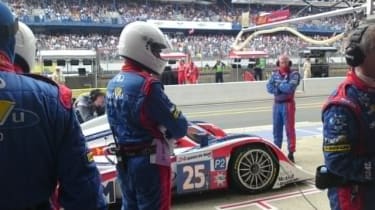 Andy’s itching to get going. ‘I don’t really like all this faffing around,’ he says when I join him in RML’s plush hospitality suite as he tucks into a lunch of gammon and pasta. ‘I would have liked to have done more laps so far this week, but that’s the way it is at Le Mans, one driver does the bulk of the work [Tommy Erdos] and then we needed to ensure Mike [Newton] got a decent run too. But the important thing is that the car’s good, so we’ll just have to see how we get on. As usual all the warranties run out at 3pm and it’s long race.’

He’s on the grid now preparing for the ceremonial start with the other 168 drivers and will be going third, which as their double-stinting to start with should see him in the car at around 18:20. ‘The tyres have been great,’ he told me, ‘the Dunlops are considerably more durable than the Michelins being run by the Highcroft team, so we should be a little closer to them than we were in qualifying. The team start in 18th place and 2nd LMP2.