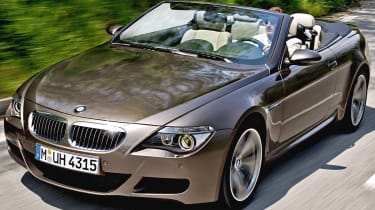 BMW is to launch a drophead version of the M6 and insists that it’ll be no mere cruiser but a car worthy of its evocative M badging. The M6 Convertible has been developed at the Nürburgring, lapping the circuit at a pace said to be very close to that of the coupe.

Although with its folding roof mechanism and extra stiffening the convertible weighs 220kg more than its tin-lidded sibling, BMW’s engineers have managed to lower the centre of gravity of the convertible to aid the handling.

All the other technical highlights of the coupe – the 500bhp V10 engine, seven-speed SMG Gearbox, M differential and Electronic Damper Control (EDC) – are carried over. As with other 6-series convertibles, it will have a very-well-insulated top that lowers and raises in 25 seconds.

The M6 Convertible will make its global debut at the London Motor Show and will go on sale in the UK in September.