Geneva verdict: The Good, The Bad and The Pointless 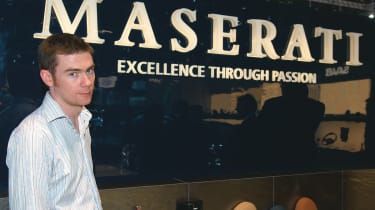 You probably haven’t heard of Russo-Baltique. Frankly, I think some of the people working on Russo-Baltique’s stand haven’t heard of it either. As far as I can gather, it’s a Russian company, it enjoyed some racing success spanning the period 1913 to, erm, 1914, and now it’s BACK! Yes! Back with a car that even Michael Winner would shun for being too vulgar, a nasty retro coupe running a Maybach V12 that will cost a mighty one million euros, gag reflex thrown in for free. And right here, on a small stand with a horrible car squatting on a turntable that’s suddenly stopped turning, is the joy of the Geneva motor show.

The Swiss are very good at certain things – annoying clocks, palette-damaging chocolates, an army that’s world class at getting stones out of horses’ hooves – but having a car industry is not one of them. This is vitally important because it means the Geneva show is relieved of the home-team willy-waggling you get at Frankfurt or Detroit and instead presents a neutral ground on which the dreamers, schemers and insane Russians who think 24 months of vintage racing is a suitable bedrock for digging up an old name can come and strut their faulty turntable stuff.

There’s Stola, presenting a grim monstrosity with a huge eagle sprouting from the grille at just the right height to skewer your appendix before you’d even had a chance to yelp, ‘Argh, look at that really horrib…’. Spanish chancer Tramontana has spotted a gap in the market for people who wish the Caparo T1 ran a biturbo V12 and had been designed in the dark.

Long-time mentalist Sbarro is here with a whole platter of silliness, including something that clearly involved buying a second-hand van, sawing the roof off and then attempting to waterproof the entire interior with what appears to be kitchen mastic. And from what passes for the local side, Rinspeed has fetched up with a transparent car that would be perfect if you passed on the Ariel Atom but still want other road users to admire your trousers. There’s something quite fascinating about these nut-job schemes, as long as you remember that they’re all mind-bogglingly pointless.

Where’s the insight, the progress, the answers to the problems that the whole car industry faces now and in the future? Sadly not here. There’d be more relevance in Sellotaping a pork chop to a tree.

So what about the big boys? Well, they’re not exactly having fun at the moment. Development costs are huge, profit margins are tiny and now the EU wants their entire model ranges to emit less gas than an asthmatic gnat.

But don’t worry, they’ve found the solution to that little knot of worry: stickers. Everywhere you go at Geneva there are cars covered with decals that read something like ‘ECO HYBRID SYSTEM BIO SOLUTION’ but might as well bear the words ‘SNAKE OIL’. Can you actually buy any of these planet-saving powertrain developments? In most cases, no. Unless you visit the Toyota stand, where that smug little Hybrid Synergy Drive badge is practically becoming an M Power-alike sub-brand in its own right and, in California at least, is twice as cool.

Of course, as you’ll have read in our interview with Bentley’s Dr Ulrich Eichhorn, hybrids aren’t really the long-term answer to anything, but at least Toyota is doing something instead of plastering a 1.4 LX with stickers whilst the hardware itself is still running rough back at the lab.

There’s a strange and impressive confidence to Toyota in Geneva. The Lexus IS-F (pictured right, top middle) looks mean and powerful, like a massive engine that’s had bodywork poured over it. In profile the nose also appears to have suffered some sort of rugby injury, but overall it’s a striking thing. Almost as striking as the Celica-ish FT-HS concept, which has little badges ahead of its rear wheels reading ‘Calty Design’. Not Giugiaro, not Pininfarina, but the name of Toyota’s own West Coast studio. Now that’s confidence, the kind that comes not just because the FT-HS is a good-looking car on really cool wheels, but because Toyota is a big car company that actually makes money.

Compare that with cash-strapped GM, whose GTC concept is quite nice looking but hardly radical. GM says it’s basically the next Vectra, except the next Vectra won’t be as blingy. Or as low. Or a coupe. So it’s not really the next Vectra at all. Although showing a production car that isn’t does at least beat BMW’s silly attempts to pretend the new M3 is a concept when it’s not.

Still, at least Bee-Em’s accountant gets to use his black pen every year. His oppo at Chrysler doesn’t even bother to order anything but red Bics these days, and when you look at the company’s show star, that’s not entirely surprising. The Dodge Demon is a blatant Mazda MX-5 crib – yes, that’s a little bit ironic in itself – but drenched in design ideas from other cars. A bit of Viper, a snatch of Streetka, a chunk of Nissan 350Z, the MX-5 itself for the interior. Oh, and Marcello Gandini should get on the phone asking for his wheelarches back. Something for everyone or, more correctly, something for no one, especially as it’s powered by one of those underperforming American engines that would struggle to pull a randy dog off your leg. In this case 2.4 litres makes a whole 172bhp.

Chrysler says the entire car is production feasible and, judging from the badly applied underseal in the wheelarches, there’s a horrible suspicion it’s telling the truth. But this is exactly why the car industry is in trouble, because it’s lazy, and derivative.

Speaking of which, most of SEAT’s problems seem to stem from the fact that all its cars look the same. But don’t worry, because now there’s a new SEAT concept… which looks exactly the same as all its other cars. Except it’s a 4x4. Jay-sus. The only thing worse is a one-off Leon sprayed in camera-damaging pink, apparently at the behest of massive-haired Columbian octave-hopper Shakira.

Keen students of pop may remember that this is the girl who once sang ‘Lucky that my breasts are small and humble / So you don’t confuse them with mountains’. A common problem, as we all know, especially for those attempting to book a youth hostel halfway up Kelly Brook. In this case, here’s another potential lyric for the slightly mad South American warbleress: ‘Lucky that my Leon is a medium-sized hatchback / So you don’t confuse it with that man’s jumper, which is also a completely disgusting pink colour and inadvertently shows why pop stars shouldn’t be allowed to design cars’.

Mind you, Geneva provides plenty of evidence that car designers shouldn’t be allowed to design cars either. Audi A5? Which beach did they phone that one in from? And then why did they call back and say, ‘Actually, can you graft on the ridge from the side of a Conti GT, please?’ Also, did Bentley realise this theft was going on or were they too busy spending all night in Stringfellows as research for the new and quite epically vulgar Brooklands coupe, which also manages to have – FACT! – the most horrible gearlever in history. Quite an achievement given that Lotus pitched up with the latest Europa having claimed to have sorted the below-par interior via the simple expedient of plastering everything in leather and installing a vile wooden gearknob that ran the Bentley’s pretty close in sheer nastiness.

More crashing disappointment over at Renault, where the new Twingo manages to be as cool and funky as Gordon Brown, complete with stickers on the outside, ones that don’t even read ‘ENVIROTECH BLUEGREEN SYNERGISM’. What part of the ‘80s are we in exactly?

Jag’s facelifted XJ isn’t much cop either. Jaguar’s boss says something in her press-day speech about ‘more muscular, more assertive’, but what I think she means is ‘Ian Callum was on holiday that week’. Shame, because the C-XF concept looks truly lovely in real life. Maybe even gorgeous, to coin a terrible advertising slogan.

Although not, as it turns out, the worst slogan at the show. The latest versions of the Mini? Apparently they’re ‘incredibly diesel’. What does that mean? Incredibly slow? Incredibly noisy? Incredibly carcinogenic? Mini also flashed up something that said ‘The Cooper side of life’, at which point I vomited into a Citroën.

But in terms of dreadful slogans, the real nadir is over at Maserati, where the whole stand is plastered with – have a bucket handy – ‘Excellence through passion’. For crying out loud, what does that mean? Actually, nothing. And the more you think about it, the worse it gets, to the point where you have to punch yourself in the face. Come on, people! This is Maserati, not Cisco Systems. Crummy business-lite straplines belong in the conference suites of airport hotels, not on the stands of one of the world’s most emotive and fabulous car makers.

Thankfully the car that sits below the piss-poor slogan more than makes up for it, because the new GranTurismo is simply wonderful. It’s shapely and sharky and exciting and all the things you’ve always wanted a Maser to be. And it’s a ray of hope in what’s often a slightly depressing smoke-and-mirrors world.

It’s not just the GranTurismo, though, because there’s that KTM X-Bow, which will hopefully prove the old motorsport adage that if something looks good it probably is, and the Spyker C12 Zagato, with full instruments for the passenger and proof that the Dutch have been sharing their stash with the Italians, and the fabulous little Fisker Artega, which shows Dodge that familiar styling ideas can be sucked into a glorious and desirable whole.

Of course, none of these cars offers anything radically inventive any more than, say, the new-but-you’d-never-notice Nissan X-trail, but at least they radiate good old-fashioned excitement. As it stands, the car industry is not in a good way and it can’t be long before big chunks of it start to slide under the tide. But at least we can enjoy the ride with people who have understood that, if nothing else, you can always sell cars on the two simple ideas of power and beauty. Better that than desperately treading water, plastering stickers down the side and making claims of racing heritage from 1913 to 1914.