From M1 to latest M3, all the M Division icons tested in one giant shootout. Also Lamborghini Reventón: a Murciélago with a radical carbon body, plus evo's long-awaited performance tyre test. On sale now. 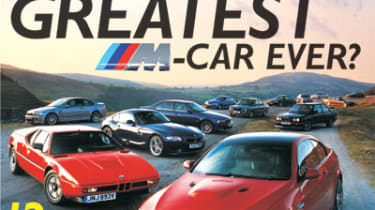 068 Cover Story: Lamborghini ReventónIt’s a Murciélago with a radical carbon body, a 1 million euro price tag and an unusual name

078 Cover Story: Best M-car everYou’ve probably got a favourite, but is it the right one? We spend three days with thirteen of M GmbH’s finest, from M1 to new M3, to find the all-time number one

104 Vanquish Ultimate EditionDrive the last Vanquish from Newport Pagnell to Gaydon? Too obvious, too short; we went to Scotland instead

114 Apollo MissionIf you reckon the Enzo and Zonda are a bit poncy, this aggressive, ugly little devil with its 690bhp twin-turbo V8 is just what you need

120 Tyre Test 2007We put nine performance tyres through the most rigorous and exhaustive test. Winners and losers revealed

132 SLK55 AMG Black Series v 911 GT3The baby Benz with attitude costs almost as much as a GT3. Can it really be that good?

162 The KnowledgeYour car has been docked half a star. You are now the butt of your mates’ jokes. Your life is ruined. Not. Get over it!