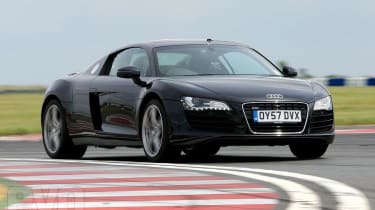 European sales figures for the first half of 2008 spell good news for top-end manufacturers, with sales of ‘exotics’ climbing nearly a quarter – and the Audi R8 to thank. An increase of 22.4 per cent comes as most other segments lose sales, with city cars the only other big climbers in a difficult market. Audi’s decision to make the R8 in less-limited numbers than before has seen sales rise from 569 cars to just under 2000. Ferrari is also flourishing, with 612 Scaglietti sales almost doubling. The F430 is in second place in the exotic sector behind the R8, and selling more units than saloons such as the Jaguar XJ and Lexus LS. The Scuderia is dominating things, being sold as a regular model rather than a strict special edition like its predecessor, the 360 Challenge Stradale.