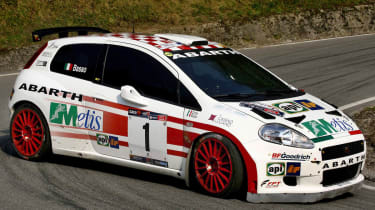 Kimi Raikkonen is to tackle the Arctic Lapland Rally behind the wheel of an S2000-spec Grande Punto Abarth (pictured) on January 22.

Kimi is understood to own the Abarth with which he is competing in the event. The Arctic Lapland Rally is the opening round in the Finnish Rally Championship, where Raikkonen will put his ‘Iceman’ nickname to the test against a handful of ex-F1 drivers, including Mika Hakkinen, Mika Salo and JJ Lehto.

The Ferrari team has been happy to give Raikonen permission to enter the rally: ‘Traditionally we always have a very open relationship with our drivers; we were criticised when Michael Schumacher played football on the race weekends,’ said Team Principal Stefano Domenicali. ‘Letting Kimi drive a two-day rally is the same approach. We consider it two days of tests for him, although it's not Formula 1.’

Rumour is circulating that a possible move to the rally stages will commence when retirement comes for Kimi. Pressure is increasing with Fernando Alonso touted to partner Felipe Massa at Ferrari from 2010.

Raikkonen has been accredited as being very calm, cool, and calculating in his race strategy although turning his attentions momentarily away from F1 may spark further speculation and criticism from the media. Whether the ‘Iceman’ will thaw in the heat of rally competition is yet to be seen.