Historic one-two for UK-based Red Bull Racing; Ferrari could be reconsidering its season 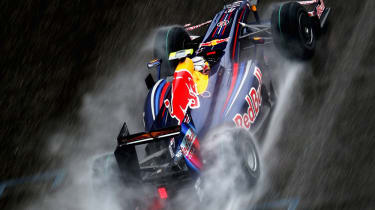 The topsy-turvy world of the 2009 Formula One season provided yet another surprising race in Shanghai over the weekend. An historic one-two finish for Red Bull saw the team pick up its first Grand Prix victory and Sebastian Vettel his second ever race win, while Mark Webber claimed his highest finish to date.

The sunny and dry conditions of the qualifying stages quickly transformed into a torrential downpour which caused the race to start as the Malaysian grand prix ended, under the safety car. Eight laps into the race the track was deemed safe by stewards and the safety car pulled into the pit lane. Vettel was unfazed by the conditions and provided one of his most impressive drives, occasionally lapping up to three seconds quicker than anyone else.

Jenson Button and Rubens Barrichello of Brawn GP claimed third and fourth place with consistent drives in the most testing race of the season so far. This result keeps Button at the top of the Drivers’ Championship by a point and sees Brawn GP’s lead in the Constructors’ Championship maintained.

Former world champion Lewis Hamilton had a good race after looking impressive in qualifying. Starting in eighth place he drove an aggressive race that saw him in fourth position at one point, however, the poor conditions coupled with an over determination to race to the front saw Hamilton spin multiple times, eventually finishing sixth.

Ferrari, who won the Constructors’ Championship last season, had another disastrous race in Shanghai. Felippe Massa was in third position until his car gradually ground to a halt, forcing him to retire. Team-mate Kimi Raikonnen was briefly challenging for points but eventually crossed the line in tenth place.

The race result means that for the first time since 1981 Ferrari have gone three races into a season without gaining a point; team boss Stefano Domenicali admitted that they would have to reconsider their season after the race in Barcelona on the May 8-10. Ferrari may conclude that it is best to draw a line under this season and begin preparations for 2010, the apparent key to success for Brawn GP following Honda’s shaky 2008. Domenicali said – ‘I think we have to wait. We need to stay cool. It is not easy, I know, but we need to stay cool because there are too many things that can change very quickly.’