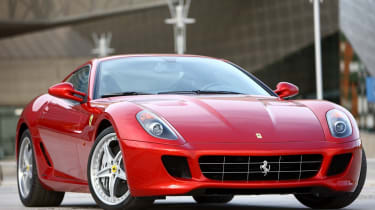 Ferrari has revealed its hand for the forthcoming Goodwood Festival of Speed. The company will be showcasing three new models during the Sunday Times Supercar Run. These will be the first front-engined V8, the California, the commemorative high performance Scuderia Spider 16M and the 599 GTB Fiorano with HGTE package.

Ferrari is also represented by the Scuderia Ferrari team who will be demonstrating the 2008 Championship-winning F1 car, driven by Marc Gené, throughout the weekend. Additional examples of Ferrari’s racing heritage can also be seen in the Cathedral Paddock.

From Infiniti, the company's performance concept 'Essence' will be shown for the first time since its debut four months ago in Geneva.

Performance for the rear-wheel-drive coupe is provided by a 600PS petrol/electric hybrid powerplant. It'lll be on display in the TECH pavilion and also on the famous Goodwood Hillclimb, where it will perform in public for the first time.

Joining Essence on the Hillclimb – and later in the Sunday Times Supercar paddock – will be the V6-powered G37 Convertible in right-hand drive form, the first example ever produced.

Elsewhere, Porsche will be showing off the latest GT3 – a UK debut – and the Panamera Gran Turismo. Both will be taking part in the Sunday Times Supercar run. A Cayenne will be demonstrating its performance and handling capabilities on a specially-designed circuit.100 years of Audi

Goodwood Festival of Speed runs from 3-5 July and admission is by advance ticket only (Goodwood ticket Hotline +44 (0)1243 755055 or email booking@goodwood.co.uk).