We go to the Goodwood Revival, with plenty of old supercars and racers to see 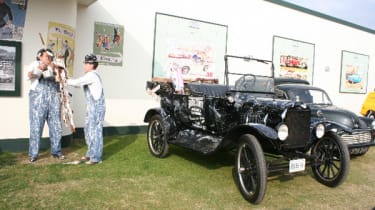 Choosing a moment that summarises the Goodwood Revival isn’t easy. Is it the moment a Ferrari 250 GTO and Jaguar E-Type Lightweight arrived at Woodcote side by side and slightly beyond the limit? The Vulcan bomber fly-by? On-track celebrations for Sir Stirling Moss’s 80th birthday? Or the Mini’s half-century being marked by dancing girls in miniskirts?

That’s the thing about the Revival. As well as being a premier historic motorsport, it’s also a celebration of the era shared by Goodwood’s heyday of the late 1940s to early 1960s. The majority of visitors dress accordingly, while all the support vehicles on site are from the correct period too. With the backdrop of Goodwood’s restored pit lane and a replica of the old Earls Court Motorshow, you really can kid yourself that you’ve stepped back in time.

It’s the racing that’s the major draw, though. Grids full of highly significant (and highly valuable!) cars are raced mercilessly – this is no gentle parade of old racers. A couple of one-hour races recaptured the Tourist Trophy, Goodwood’s most famous fixture during the late 1950s and early ’60s. Cars like the aforementioned 250GTO and E-Types battled AC Cobras and Aston Martin DB4s for victory. There was also a 30-strong grid of Minis and an outing for prewar racers in the Brooklands Trophy. Each and every race was a true spectacle; from the sidelines, you could see the opposite lock and careful balance being achieved by the drivers, while a whiff of Castrol R hung in the air.

Oh, and just to remind visitors that it really is 2009, there was an early chance to check out the new Jaguar XJ and rather brisk Noble M600, which we’ve driven in Issue 136 of evo, in shops now.