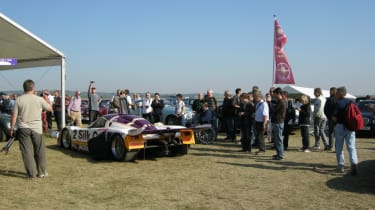 Le Week-End de L’Excellence Automobile de Reims. Not a very catchy title is it? Now in its third year though, it’s developing into the French equivalent of Goodwood’s Festival of Speed, only with a 4.4 mile road circuit to play on rather than the Earl of March’s driveway.

Held last weekend (26-27 September) it hosted well over a hundred cars, about the same number of bikes (Giacomo Agostini was guest of honour), plus loads more to see in the paddocks.

The roads that make up the old circuit are closed off, extra chicanes installed to prevent drivers matching the colossal speeds that used to be recorded when Reims hosted Formula One and Endurance racing, but aside from that it has the same friendly atmosphere as the Festival of Speed.

It’s a bit lower key than that, but the sight of Jaguar D-Types leading howling Maserati 250Fs round a circuit that last witnessed competitive racing in 1972 was hugely evocative. Go before it gets too much more commercial. Visit www.weea-organisation.com for details of next year’s event.