Jenson is F1 world champion, but how did he and Brawn get there? 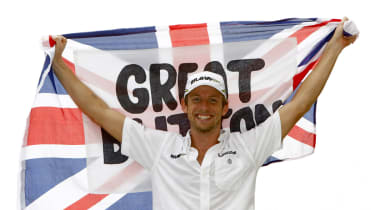 You need to go back to December 2008, when Honda pulled out of Formula One due to the economic crisis, leaving 700 staff and of course Button without a job. It looked like the Brackley-based team was going to go under, until a management buyout from team principal Ross Brawn saved the team and it was now officially known as Brawn GP. There were mere months to prepare for the new season, and to Brawn’s credit, by Australia it was lining up at the start with a competitive car.

The Brawns surprised the whole grid with their newfound speed, with Jenson getting pole and winning the race. Button would go onto to win a further race at Malaysia, and the bronze in China.

Jenson went on to dominate the next part of the season, winning the next four races in relative ease, creating rumours the Brawn could have an unfair advantage over the rest of the field.

The Red Bulls of Sebastian Vettel and Mark Webber would then lead the next two races, however, comfortably eating into Button’s lead, but it wouldn’t be enough to fill the huge gap Button’s early wins got him.

His teammate Rubens Barrichello would go onto win the next two races – the European and Italian grands prix – meaning the two Brawns would now be fighting each other for the championship. Races in Singapore and Japan would see Button and Barrichello finish within only one point of each other, and by the penultimate race of the season Jenson only needed to finish within four points or less of his Brazilian teammate to win the title.

Brazil would turn out to be a difficult race for Jenson, rain on Saturday leading to him qualifying 14th, whereas Barrichello reached pole for his home race. The championship looked like it would go down to the final round in Abu Dhabi. However, crashes, retirements, safety cars and of course a fair amount of skill showed Button to fifth and the championship.

The tenth British world GP champion is convinced he can also win the title next year, saying he plans to be the first Brit to win two championships back-to-back. He also added he will stay on with Brawn for next years season, despite rows over his pay.

‘This team is not a one-hit wonder. And neither am I.’ We look forward to finding out if he’s right…