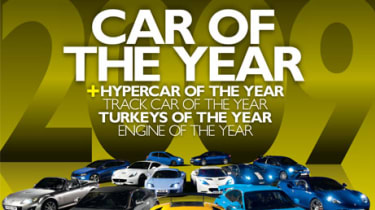 LettersOnly venture to the Ring with your eyes wide open, says one reader. Don’t imagine the new McLaren supercar has Ferrari too worried, says another. Get some milk and bread on the way home, says the missus

There can be only one...The breathtakingly beautiful Isle of Skye plays host to evo’s Car of the Year contest 2009. No fewer than 13 contenders venture to Scotland to battle it out, from the Renaultsport Clio 200 to the Lamborghini Murcielago SV, via the VW Scirocco R, Artega GT and Lotus Evora. After two intense days of driving, the field will be whittled down to a final five, and only as the sun sets on the third and final day will we crown the winner. The new champion then gets to meet last year’s winner, the Nissan GT-R, in a sort of Champions League (a small one)

The Best and Worst of 2009As well as naming the Best Modified Car, Best Concept, Best Technical Innovation and Engine of the Year, we also name and shame the lame ducks, titter at the cock-ups and award that least coveted of all gongs, the evo Turkey of the Year. We’re going to need a lot of stuffing for this one…

Track Car of the Year 2009We don’t use a race track to help decide Car of the Year but some of the contenders – including the Focus RS and 911 GT3 – go toe-to-toe with more specialised machinery such as the Mugen Civic, Radical SR8LM and Caparo T1 at the Bedford Autodrome to decide 2009’s best track car

Hypercar of the Year 2009Immense power, astonishing performance and enormous price tags. Henry Catchpole sorts the must-haves from the wannabes, the high achievers from those with merely high hopes, on the way to revealing our Hypercar of 2009

SubscriptionsApparently John and Edward have signed up for their three trial issues plus free book. Don’t miss out

Long-term testsA Mercedes SL63 AMG joins the fleet, the LP640 goes in for open-engine surgery, and we’re £5K into the BMW 135i mods, so just watch that lap time tumble  Buying GuideBag yourself the last of the great Mitsubishi Evos, the IX, for £14K

Ask the ExpertsWhat’s a flat-plane crank? The off-side rule of engines explained

Birth of an Icon: Citroen SMIf you’re an SM fan, hunt down the clip of Burt Reynolds driving one in The Longest Yard