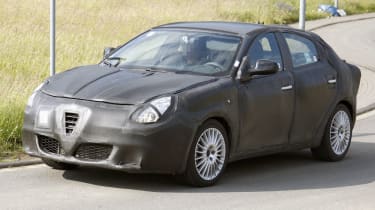 Excited about Alfa’s new hatchback? So were we. Sadly we can’t talk about it, despite having all the vital information right here. You could have been sitting there browsing half a dozen pictures of it, but instead they’ve been withdrawn and we’re left to ponder what’s going on. The reason? The Italians have changed its name and said we can’t divulge details of the car for the foreseeable future. The replacement for the stylish 147 hatchback was going to be called the Milano – it was already widely-known fact, and was revealed in the initial release – but an announcement by Alfa late on Friday revealed the name has been dropped and all news of the car embargoed until further notice. It’s not often such curveballs are thrown, and a picture and details have made their way into our next issue – on sale next Wednesday, December 9 – with Alfa’s change of heart coming too late in the day for our deadline. We’re led to believe the reasoning behind it all lies in Alfa Romeo’s decision to relocate fully from Milan (or, indeed, Milano) to Turin, turning its back on 99 years of Milanese heritage. Since Fiat’s acquisition of Alfa in 1986, the company has gradually been moved away from its home, with car production stopped in 2000 and the last group of employees – designers and engineers, mainly – being shifted early next year.  The workers’ anguish at the car’s insensitive name has sent Alfa back to the drawing board at the very last minute. All bets are now on it being renamed the Giulietta (calling it Torino would be really taking the biscuit) but we want to know if you’ve got any better ideas. The Redundensi? The Relocato? Let us know on the Forum. Keep your eyes on evo.co.uk for the latest on the new Alfa. And don’t forget to grab evo 139 next week to read the stuff you shouldn’t…