Never mind the 1000mph Bloodhound project. This is where the real cutting edge is. evo technical writer Ralph Hosier is involved in another, wonderfully eccentric World Land Speed Record attempt 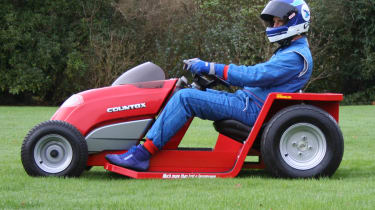 It is nothing short of remarkable how often the words 'British' and 'mad' spring up in the same sentence. So it’s no surprise that the team attempting to break the World Land Speed Record for – wait for it – lawnmowers is based in this fine country.

It’s all the brainchild of Steven Vokins, life-long petrolhead and man in charge of interesting things at Beaulieu Motor Museum. The idea came to him as he lay in bed recovering from major heart surgery, which is a suitably mad start to any project. And they don’t come much barmier than trying to get what is basically a normal lawnmower to do 100mph on Pendine beach in Wales. In fact there are quite tight regulations for this sort of thing, so building the machine required a specialist team of experts. Countax, manufacturers of quality mowers, stepped up to the plate in superb style and their in-house mower racing team of Steve Hatt  and Peter Farrell set to work building a specialist machine using all the best bits from their standard mowers. At the same time I was drafted in to do some aerodynamics calculations and worry about technical details. The result is this remarkable machine, which still cuts grass, and which will be driven by Don Wales, the grandson of Sir Malcolm Campbell who famously took the World Land Speed Record on the very same beach. Don currently holds the Land Speed Record for electric cars and also recently broke the steam car world record. Not only will the team win the mower record back off the Americans (who have so far managed 82mph), but it is intended to raise awareness and funds for two charities that have played a big part in saving Steven's life; Wessex Heartbeat and Great Ormond Street Hospital for Sick Children. Please have a look at the web site (www.projectrunningblade.co.uk) and feel free to join the Facebook fan club.