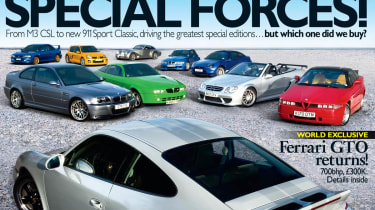 NewsIf a Porsche GT2 or a Ferrari 599 HGTE is just a bit too softly-softly for your liking, then you’ll be pleased to hear that Porsche is making a GT2 RS, while Ferrari is taking the stickers off a 599XX and calling it the 599 GTO (probably)

DrivenWe give a handful of the newest cars a first drive, including the new VW Golf R, Rolls-Royce Ghost, Caterham 7 Roadsport 175 and some tuned hot hatches amongst others

LettersA reader mourns the passing of the Ferrari manual shift and Mr MonoTracer has picked himself up, dusted himself off and responded to last month’s feature…

The SpecialsThese cars weren’t built to boost sales numbers. They’re not useful and they weren’t created to be understood by everyone. But their existence does make our world a better, more interesting place, so we thought we’d celebrate them.

We start on page 50 with the new 911 Sport Classic before imagining a few Porsche specials of our own. Then on page 64 we drive nine of the most sublime specials ever built, including a none-too-common CLK DTM AMG and an even rarer Lancia Hyena. Then we talk to some of the people behind the craziest specials to ask them what they were taking at the time. On page 82 Richard Meaden retraces James Dean’s final journey in a Boxster Spyder, the modern incarnation of the car the star was driving when he met his death. Finally we ponder the specials that didn’t quite work (including one owned by Harry Metcalfe…)

Guy Martin and his V12 VantageWhat sort of person considers it normal behaviour to buy an Aston V12 Vantage instead of getting on the property ladder? The same sort of person who gets their kicks on the Isle of Man every summer…

The future of rallyingThe WRC has been gradually slipping further from the centre of motorsport fans’ radars in recent years, but it’s due to make a comeback. Here’s why you need to take your bobble hat out of storage

Porsche 911 Turbo v Nissan GT-R v Audi R8 V10The Porsche 911 Turbo was the original all-weather supercar, but its pre-eminence has been shaken in recent years. We pitch the latest generation with a paddle-operated PDK against its two most formidable four-wheel-drive rivals in a suitably wet Wales

SubscriptionsApparently the new Dr Who just takes over the old one’s evo sub. If you’re not in that lucky position, click here to grab yours

Project VeyrogSome say that its new stickers have drawn admiring looks from Gemballa and that when it spits flames from its exhaust it is openly mocking the Koenigsegg CCX. All we know is, it’s called the Veyrog

Long-term testsOur RS-slaying Focus ST has left us this month, Simon George is regretting ignoring a warning light in his Aston DBS, and David Yu reveals his pride and joy in its surprising new shade of purple

Buying carsIt’s a new year. In fact it’s a new decade. So it’s definitely time for a (nearly) new car. Like a Porsche Cayman S perhaps? What a lovely way that would be to kick off 2010. Plus, we’ve been Driving the Ads again – this month an Elise special edition and a gorgeous F355

The KnowledgeAll the vital stats on every new performance car, alongside the best of the oldies. Meanwhile the Shelby Mustang GT500 sets a time round the Bedford Autodrome West Circuit. Ye and, indeed, Ha!

Birth of an icon: TVR Speed 12Only TVR could produce a special as special as the Speed 12. A sort of interesting fact is that it’s the only car ever to receive eleven and a half stars in an evo review