The Dakar rally’s on at the moment. Here’s what you need to know about the race 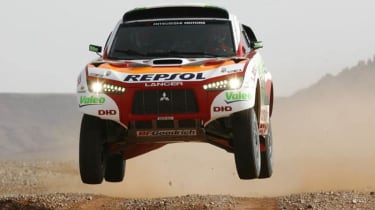 Originally the Paris-Dakar Rally, this is the second year on the trot it avoids Africa (due to terrorist threats). An endurance test run over 17 days and 5500 miles, there are different classes for cars, trucks, motorbikes and quad-bikes.  RouteThe route is a loop, beginning and ending in Buenos Aires, Argentina. The course also takes in a large part of Chile, including the brutal Atacama desert.  The race comprises 14 legs, with one rest day in the middle of the action. Just like its rallying cousin, each leg consists of road sections interspersed with timed ‘special stages’.  Terrain is varied throughout the race. Racers can expect anything from wet swampy stages right through to desert and mountainous conditions. The final stint is a flat-out dash to the finish – last year competitors reported using full throttle for up to 81 per cent of this leg.   Who can enter? Classes are split into four main sections: cars, trucks, bikes and quads.  CarsWith separate categories for both two- and four-wheel drive vehicles, plus petrols and diesels. There is even a class especially for alternative fuels. The field is usually dominated by fully spec’d all-wheel-drive cars. Interestingly, petrol powered cars are now allowed a slightly larger restrictor device than diesel cars, because it was decided that oil-burners had too much of an advantage in recent years.  TrucksTwo categories of truck are allowed to compete in the Dakar this year: series production trucks and modified trucks. The difference between the two is the level of modification allowed to endure the rigours of the race. At the top level these trucks really are something to behold. Point yourself to YouTube to see what we mean.  BikesThis is the first year larger cylinder bikes will be restricted. According to their results, the better riders will be asked to use a intake restrictor that brings the larger bikes down to the power levels of 450cc machines. By 2012 there won’t be any bikes over 450cc in the race. There are two types of vehicle allowed in this section, ‘marathon’ vehicles that must be exactly as the manufacturer designed, and ‘super production’, referring to modified vehicles.  QuadsCompetitors can use any quad as long as its engine is less than 500cc. It can be two or four-wheel driven.  Evo’s favourite We’re going to tip VW driver Nasser al-Attiyah to win the car category, but watch out for ex-WRC champion Carlos Sainz who could make waves this year. Both drivers are piloting heavily modified VW Touareg’s, so to hedge our bets, we’re shouting for a Volkswagen win at Dakar in 2010.